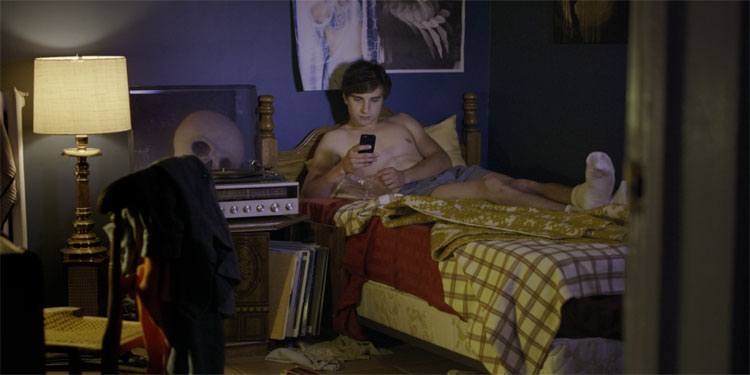 The motto of the Iris Prize Festival is ‘Watch Films. Party Nightly. Repeat.’ and unfortunately the ‘Party Nightly’ bit means these review have taken a bit longer to get ready than initially planned. However, you can check out our thoughts on another 10 of film that competed for the International Short Film Prize – the biggest LGBT Short Film Prize in the world, worth £30,000.

You can check out Part 1 featuring 15 LGBT short film reviews here, and the final part here:

Pyotr495
Director: Blake Mawson
Both Pyotr495 and the next film, Tonight It’s You, deal with somewhat similar ideas, while taking them in slightly different directions. Pyotr495 is set in modern-day Russia, where a young man heads out for a hook-up with a guy he’s met on a dating app. However, once there he discovers the guy and his friends actually intend to punish and torture him for being gay – which in their minds also makes him a paedophile. They may have bitten off more than they can chew though when something monstrous emerges. It’s an interesting idea and deftly brings a touch of supernatural horror into a gay-themed short. The film also consciously engages with the situation in Russia, where the gay propaganda laws have allowed homophobes to feel they have impunity to kidnap and torture gay men (and in some cases worse). Horror fans will definitely appreciate where the short goes, which starts out feeling like a drama before taking a bloody, revenge fantasy turn.
3.5 out of 5

Tonight It’s You
Director: Dominic Haxton
Dominic Haxton has previously brought us some great shorts, such as Teens Like Phil, We Are Animals and Tonight It’s Me. While his latest has a similar name as the tender, trans-themed Tonight It’s Me, and one of the same main actors, Jake Robbins, Tonight It’s You heads for horror, with a setup that’s surprisingly similar to Pyotr495. A guy meets someone on a dating app and heads to their place for sex, only to discover they have to meet in a shed as the hook-up’s parents are asleep in the house. Things take a dark turn when the father catches his son outside and forces him into the house, where it appears he wants to exorcise his child’s gay demons – or perhaps his real demons. As with Pytor495, Tonight It’s You takes what is becoming an increasingly common part of gay life, the online hook-up, and plays with its potential dangers before taking them to the extreme. Oddly both could also be taken as suggesting homosexuality is a literal demon lurking inside, although I don’t think either is actually trying to say that. You could certainly read it that way though. Often tense and with a few very creepy moments, Tonight It’s You is certainly an entertaining watch.
3.5 out of 5

Last Vestiges
Director: Seth Poulin
A man working in a gay strip joint is having to face the fact that he’s getting older and that the younger dancers are now more in demand than he is. As he gets more desperate to earn dances, he goes into a back room with a much older man, who just seems to want some sort of physical contact with another man – a hug. If a theme has emerged from Iris 2016 it’s gay people dealing with aging. Here’s it’s a man used to being able to use his youth and sexual energy to get what he needs, discovering that the tricks that once worked no longer do, especially if that is all your offering. With an interesting take on the contrasts surrounding the difference between sex and intimacy, the physical and internal and the stages of aging; while most gay male viewers may not be strippers, they’ll still recognise the insecurities and changes Last Vestiges deals with. It’s also an intriguing way of engaging with the superficiality of so much gay culture, and showing that there are still layers underneath, even if they’re not always nice ones.
3 out of 5

Choke Hold
Director: Robert Gray
Two guys are at a party, when one decides they want to see if they can withstand a choke hold, only to find that they pass out. That’s the beginning of an unspoken dalliance between the men at a series of parties, as one asks to be choked again to see it they can fight it this time, before it’s the other guy’s turn. Choke Hold plays with unspoken desire, as each man uses the intimacy of the hold and the fact they then have an unconscious guy with them to express what they’re afraid to say publicly. Although I’m not sure going around choking guys until they pass out is the best way to express repressed desire, it’s an interesting idea for a film. Choke Hold manages to mix sweetness, sadness and the threat of danger, looking at a layer beneath bromance/jock labels to what may be going on underneath. A strong sense of how to use a camera to help tell the story ensures Choke Hold works better than it might otherwise have done.
3.5 out of 5

Great Escape
Director: Sal Bardo
Sal Bardo has made some really good gay-themed short films in his time, such as Chaser, Sam and Requited. He returns with Great Escape, a black and white meditation where a woman wakes up, sits on the edge of her bed and contemplates her life. She could have an entirely different future, leaving her husband behind and going after the female love she desires. Once more looking at age and sexuality, Great Escape also shares a thematic link with several other Iris shorts, such a B. and Balcony, of the societal pressures that strive to push people in one direction when they’d really like to go another. Ultimately, Bardo’s film is based around a relatively simple idea, and not a wholly original one, but it’s raised up by some great cinematography, a strong soundtrack and a real sense of empathy and sadness for the main character.
3 out of 5

Sign
Director: Andrew Keenan-Bolger
For this one, I really need another reviewer who knows ASL (American Sign Language) to add an additional take on the film, as it’s possible they may have a different view of it. The movie has no spoken dialogue, with hearing audiences only getting an evocative score. Everything is done through ASL, but there’s no subtitles – hence the need for two reviewers, as only those who know sign will be aware of what they’re actually saying. Two men meet on the subway, one of whom is deaf and the other hearing. It’s the beginning of a love story, as each learns to deal with the other’s differences – one needing to learn sign language, and the other having to handle the communication barrier – with the film charting their ups and down, including whether they can stay together. Signs is kind of like a rom-com but speeded up. Indeed, it packs enough into 15 minutes with no spoken dialogue that you wonder why other filmmakers need 90 minutes and a lot of yapping. It may not have the darkness and anger of some of the other Iris Shorts, but it was my personal favourite of the festival.
5 out of 5

The Last Day Before Zanzibar
Director: Filipe Matzembackher & Mario Reolon
Perhaps the least easily accessible of the Iris shorts, The Last Day Before Zanzibar is also the most explicit and the only one to directly deal with bisexuality. Perhaps the key to understanding it is that it’s inspired by the work of 19th Century French poet Arthur Rimbaud, and is more a filmic poem than a straightforward story. It’s about three people – two men and a woman – one of whom is due to leave the next day. They reminisce, view some of the leaving guy’s porn work, have sex together and eventually fall asleep. Many in the screening didn’t know what to make of it, and there was a sense of explicit pretentiousness for its own sake. Perhaps with a few more viewings it would be begin to reveal itself, but on a single watch it was difficult to find more than a few vague ideas about isolation, connection, the call of elsewhere and an odd meditation on death.
2 out of 5

09:55 – 11:05, Ingrid Ekman, Bergstatan 4B
Director: Christine Berglund & Sophie Vukovic
An aging former dancer, Ingrid, has been diagnosed with terminal cancer and so home-help has been assigned to her a few days a week. When Frida knocks on her door, Ingrid is at first unsure about this intrusion into her isolation and independence, but the woman’s youth, vitality and friendliness unlock desires in the older woman she can’t deny. 09:55 – 11:05, Ingrid Ekman, Bergstatan 4B is a great little film, exploring ideas such as lost youth, the sexual desire of older people, the connection between intimacy and sexuality, and how the body changes as it ages. With a tremendous performance from Lisbeth Zachrisson, beautiful black and white cinematography and a great sense for both the melancholy of an impending end and eagerness for something new, it is both evocative and thought-provoking.
4.5 out of 5

B.
Director: Kai Stanicke
One of two animated shorts in the Iris International Shorts programme, B. is a stop-motion effort that took two and a half years to complete, with Barbie-like dolls as its characters. It follows a woman whose interest in a red-headed woman is literally pushed aside by a man who thrusts himself into the boyfriend position. They head into a courtship that hits all the socially expected markers but seems to bring neither of them any happiness. Through it, the woman continues to think about the flame-haired girl she didn’t end up with. Using the main character’s fantasies and dreams to play out various possibilities and feelings about the situation they’ve ended up in, B. brings up a variety of ideas, before jumping into live-action for the final couple of minutes. Well-made and with a strong mix of humour, horror and longing, perhaps the most interesting thing about B. is how it engages not just with people hiding or ignoring their sexuality, but also the pressures that attempt to push people, particularly women, in socially traditional directions, presented to them as if there are no other options. It also unsurprisingly suggests that those pressures won’t end in happiness.
4 out of 5

Balcony
Director: Toby Fell-Holden
WINNER OF THE IRIS PRIZE & BEST BRITISH SHORT
Set in a deprived part of London, Tina looks up at the balcony where she and the other residents know an immigrant father and his daughter, Dana, live. Chinese whispers and prejudices have ensured people think they know what happens inside the flat, which leads Tina to befriend Dana after the latter is targeted by racist bullies at their school. Tina feels a connection and attraction to the young Afghani woman, however, her attempts to unpick reality from what she thinks is happening leads to a shocking conclusion. Issues of sexuality, gender, prejudice, xenophobia, racism and our tendency for transference and projection of our own problems onto others mix to create a powerful and complex melange. It’s the sort of short that with leave the viewer both reeling and with lots to think about, where the LGBT content intersects with all sorts of other vital issues, offering an interlocking amalgam of ideas that is both unusually insightful and emotionally powerful. It also has an absolutely brilliant performance from Broadchurch’s Charlotte Beaumont, who is utterly incredibly and would probably be up for major awards for Balcony if this was a feature. While it probably wouldn’t have been my choice for the main Iris Prize, it is undoubtedly a great short.
4.5 out of 5