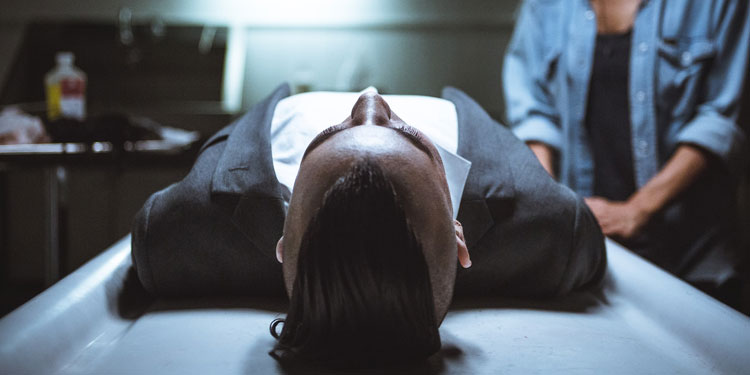 The final part of our Iris Prize short films review looks at the final 10 that competed for the International Short Film Prize – the biggest LGBT Short Film Prize in the world, worth £30,000. They cover a broad range of subjects, from adolescent crushes to sado-masochism.

Take a look at what we thought below. If you’re interested in our other Iris Prize 2016 short film reviews, you can find Part 1 here, and Part 2 here.

Vamonos
Director: Marvin Lemus
A woman tries to convince the mother of her dead girlfriend that rather than being buried in a dress, the deceased woman should go to her final resting place in something more traditionally masculine – the type of clothes she wore in life. However, the Catholic mother refuses, deciding her daughter’s body should be forced in death to be as feminine as possible. The girlfriend knows that in reality her lover would want to be buried in the vintage Armani suit she’d given her, so she and two friends set out to do something about it. Engaging with issues of gender and sexuality, as well as some people’s wish to use death to rewrite history, Vamonos is a challenging but ultimately empowering short. It doesn’t 100% work though, simply because its conclusion leaves open obvious questions and it perhaps could have been stronger on the importance of non-traditional gender expression to some people.
2.5 out of 5

Yu And Rachel
Director: Wu Ji’em
Two young Taiwanese women are wandering around on a Friday night, buying ice cream and talking about boys and relationships. One of the women has started seeing a guy, although the only thing she seems to like about him is that he likes her. The other finds it difficult to understand why her friend would rather be with this guy than her. Although some may find it problematic, Yu And Rachel looks at an interesting idea – if you could separate the idea of sexuality being innate or a choice from the equation, what gender and social preconceptions would push someone towards an (at least outwardly) heterosexual existence? As with some of the other shorts, there are ideas of society creating constructs that make people think they have no other options than to follow preordained paths. Done in an extremely naturalistic style and in real time, it neatly explores its themes, with an open ending that will leave people thinking.
3.5 out of 5

How To Be Alone
Director: Erez Eisenstein
How To Be Alone was one of the shorts that got the audience talking most following its screening, although probably not in the way the director had hoped. A woman is feeling desolate, especially after seeing her ex with another woman, and so buys a recording that purports that it will teach her how to be alone, but not lonely. A man’s voice instructs her on what to do, telling her how to get over her past and no longer feel the need for love and intimacy. While an interesting idea, it’s a film that’s full of problems, not least that it never seems to work out whether the man’s voice knows it’s a parody or whether it’s simply up to the viewer to see it in that way. It’s also horribly over-simplistic about the possibilities of contentment while being single and/or in one’s own company, hanging onto an almost pathological image of the need for another person, in a rather unhealthily co-dependent way. Some also took issue with a lesbian-themed film that uses a male voice that continually instructs the female character in a truly patriarchal way, but never works out how and if it wants to truly challenge it. How To Be Alone was made as a student film, and the director certainly has potential, but hopefully his next project will keep a much stronger hold over what its talking about and think it out a little more.
2 out of 5

Still from ‘Kaspar X: If I Had A Soul’

Kaspar X: If I Had A Soul
Director: Kaspar Wan
This autobiographical documentary follows the titular Kaspar, a trans man from Hong Kong, who’s recently had breast reduction surgery and is still in the process of telling many of those he previously knew that he has transitioned. While initially the documentary seems as if it’ll be a relatively simple look at a trans man, with the main interest coming from the fact it takes place in a different culture to our own, it then begins to engage with faith, and the fact the church Kaspar and his mother belong to is agitating against LGBT people and calling for condemnation from the congregation. Kaspar begins to try to change their minds, while his mother, who’s been on her own journey of confusion and almost-acceptance, also tries to figure it out. It adds a fascinating extra dimension to the film, allowing it to pack a lot into its 24-minute runtime. It helps unpack an interesting mix of gender, sexuality, religion, tradition and the difference between younger and older generations. What it lacks in technical polish it certainly makes up for with heart and a charming central figure.
4 out of 5

Sunday Lunch (Le Repas Dominical)
Director: Celine Devaux
The second of Iris’ two animated shorts is a uniquely French affair, where a man recounts what happens when he goes to have dinner with his family – such as the quiet father, verbose mother, and spinster aunts who ask him crass questions about his life as a gay man. His family ask questions where they don’t care about his answers as they already have ones of their own, and give him advice that contradicts what they themselves do. All this is visualised with animation that rather than simply showing the story, illustrating the narrator’s thoughts about it, from his frustration about his family’s attitudes, to the fact that underneath it all there is still great love. A witty film that scored some big laughs from the audience – and a special mention from the Iris Prize Jury – Sunday Lunch works especially well as it connects strongly with those domestic annoyances that many will be able to recognise with their own family, while never forgetting why we put up with them. That’s especially true for an LGBT audience, who will know the feeling that your life doesn’t quite fit with the rest of your family’s and they’ll never quite get it, even if they do make some slightly excruciating efforts to try to.
4 out of 5

The Den (La Tana)
Director: Lorenzo Caproni
Christian is on a family beach holiday with his wife and child when he runs into Luca, someone he knows from the past. Luca tells Christian where he’s staying, not expecting the man to show up, but when he does it’s the start of a dark, sado-masochistic engagement that restarts a ‘game’ they played years ago, and which involves Luca being tied up and sexually degraded. With some extremely challenging ideas and visuals, The Den continually asks the audience to evaluate and re-evaluate what they’re seeing. Is it consensual? Was being made a virtual slave what Luca expected? Did their relationship start as rather nasty childhood sexual abuse? If so, what is Luca hoping to get from the re-connection? Or is what we hear them saying all a ruse, and the truth is something completely different? The film never fully answers these and other questions, but it successfully gets your mind racing about some very challenging possibilities. It’s the sort of film where different viewers will have very different takes on what they’ve just seen, and that’s exactly what it was designed to do.
3 out of 5

Nineteen
Director: Madeline Kelly
A young man has gone to see a gay hustler to lose his virginity. His sister has arranged it for him as he has an illness that means this may be the only chance he gets. However, his fears about his own sexuality and what he is looking for in intimacy mean it may not be just sex he really needs. With charm and a couple of good performances, this Aussie short is fairly simple, but based around an interesting idea. While the developing relationship between the hustler and his client isn’t always 100% convincing – there’s a slight feeling of it being what the filmmakers wish would happen rather than being genuinely real – the journeys they are on certainly holds the audience’s interest with compassion and empathy, as each re-evaluates their expectations and feelings about what is happening.
3 out of 5

Little Boy Blue
Director: Nathan Keene
Little Boy Blue was probably the biggest audience divider of the festival, with some people saying they thought it would win the main Iris Prize, with others not liking it at all. A magical realist fantasy, the film centres on a child who was born a boy but raised as a girl following a botched circumcision. She discovers that in a barn on the next door farm there is a little boy locked up and abused by his father. Despite the increasing dangers, she cannot help but be intrigued by what she has seen, which ultimately leads to a violent and bloody showdown with the boy’s father. Little Boy Blue is brilliant looking movie, with oodles of style and panache, as well as a couple of truly shocking moments. However, it also feels like a movie that takes some very big subject – intersex conditions, gender conditioning, child abuse etc. – but engages with them so little that it almost feels exploitative. Unfortunately, its allegories aren’t strong enough to validate what it’s talking about. It’s overly simplistic in a way that doesn’t even work as a horror fairy-tale. It certainly manages to produce strong reactions, but for my money it’s not earned.
2 out of 5

Little Doll
Director: Kate Dolan
An adolescent girl, Elenore, is in a toy shop when she bumps into a slightly older girl, Alex. They bond as they make music together, with the older girl inviting the younger to a sleepover. When she gets there, Elenore finds herself the outsider, as while her new friend welcomes her, the others aren’t impressed by this young interloper. Sweet and with a good feel for the power structures of young people, Little Doll is about a time when something more than friendship is stirring but before people know quite what that might be and what it means. It’s where intimacy starts to mean something but doesn’t have a full conscious context. These girls could end up straight, gay or bisexual, but at the moment they’re at the very beginning of discovery of a first same-sex crush, and others don’t want to allow that discovery to upset the established order. Indeed, the film uses the structure of pre-teens to compare the societal pressure on people to follow an accepted path that may work for them, but not necessarily for others.
4 out of 5

Like a Butterfly (Wie Ein Schmetterling)
Director: Sabrina Maria Roessel
A five-year-old girl finds a bird shortly after it’s hit a window and died, but can’t understand why it won’t stand up and fly away. This starts a journey of discovery about the meaning of death, something that is increasingly relevant as one of her mothers is severely ill and may not live to see the child’s next birthday. Although I’m not sure young people are quite so innocent about death that they would, like this child, initially seem to be incapable of grasping even the most basic fundamentals, Like A Butterfly is a sometimes moving attempt to engage with a difficult subject, exploring both death and the strength and love of same-sex families.
3.5 out of 5