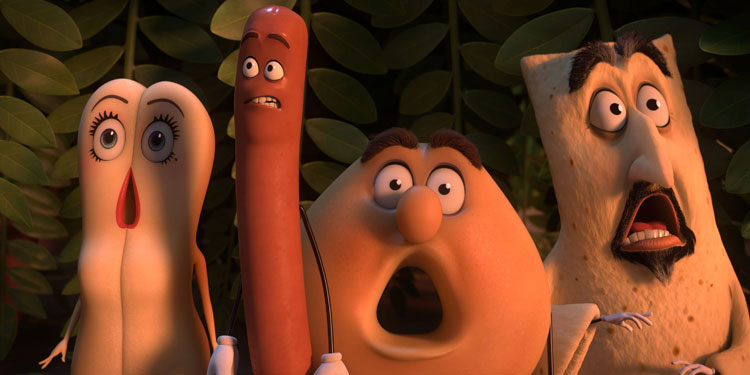 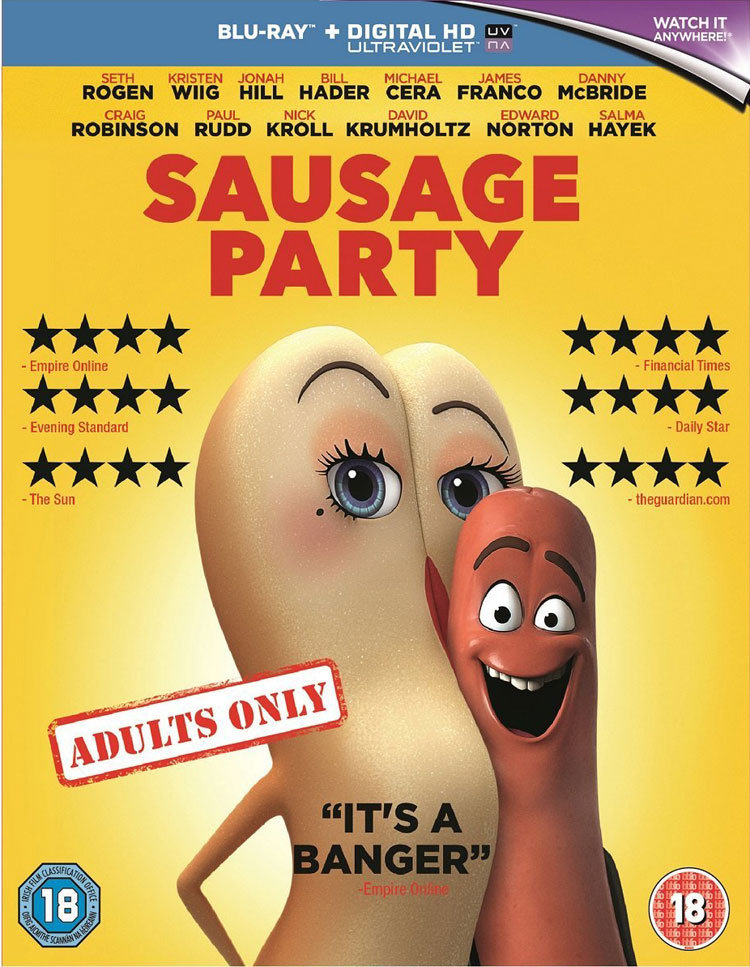 Frank (Seth Rogen) is a sausage, who’s spent his life in his package in a supermarket, waiting to be picked by the ‘gods’ (aka humans), and taken to The Great Beyond. Every day all the food in the market sing about the joys of The Great Beyond, and how nothing bad could possibly happen to them there. The sausages are also excited because getting picked will finally get them out of their wrappers and sliding into the sexy buns they’ve long flirted with but barely been able to touch.

However, a jar of Honey Mustard returns from The Great Beyond with tales of horror about what humans really do to food. The rest of the market won’t believe him, but after Frank ends up getting left behind when the rest of his packet of sausages get picked and taken away by a human, he heads off on a quest to find out the truth about The Great Beyond. He wants the bun he’s fallen for, Brenda (Kristen Wiig), to come with him, but she just wants to get back to the shelf in the hopes she’ll get picked by a God – even though she’s worried she’ll no longer be judged worthy because she and Frank have touched tips. While Frank thinks that finding the truth about what humans do to food is all he needs to do, will anyone want to listen to him if he does?

Sausage Party starts at is means to go on, with a song written by Alan Menken (Beauty & The Beast, The Little Mermaid, Aladdin) in full Disney-esque mode, but with utterly filthy lyrics that let you know that this will be ninety minutes of full-on sexual humour, a lot of swearing and an active desire to do everything that doesn’t happen in a typical animated movie. It’s rude, crude and often very funny.

As well as being incredibly silly, it also wants to make a few points, with the whole thing acting as a metaphor for people’s relationship to religion. Frank becomes obsessed with finding proof about what happens in The Great Beyond, while most of the rest of the food is happy to believe it’ll be wonderful without questioning the evidence for that. However, Sausage Party is not solely about bashing people’s beliefs, as Frank also has to realise that no one is going to listen to him if he treats the believers like morons.

To be honest, the film’s ideas about philosophy, religion and cultural division aren’t desperately deep, but they’re also the sort of thing that rarely gets an airing in mainstream cinema, and it’s nice that when it does, it has respect for what belief can mean to people, even if it disagrees with it.

All that’s mixed in with plenty of filthiness, include Edward Norton swearing liberally as a bagel, James Franco as a stoner who suddenly realises food is alive after he tries bath salts, Jonah Hill as a jock sausage, Michael Cera as a deformed frankfurter who discovers the truth about the outside world and tries to get back to the store, and Salma Hayek as a lesbian taco.

With Rogen and his crew active behind the camera as well as lending their voices, you might expect the inclusion of a lesbian taco will be an excuse for a bunch of offensive, casually homophobic gay jokes. However, as the movie goes on, it reveals itself to be something more than that, as it’s a film that it almost accidentally one of the gayest mainstream movies ever released, and certainly contains some of Hollywood’s frankest depictions of gay sex. Yes, it’s ridiculous that for Hollywood to ‘dare’ to be frank about gay sex they need to do it via animated food, but at least it’s there!

Alongside Hayek’s taco who’s trying to resist her same-sex urges, there’s a Jewish bagel and an Arab lavash who becomes lovers, and the whole thing ends up with the supermarket engaging in a massive pansexual orgy. Other than the taco’s initial feelings that the gods want her to resist her urges towards Brenda, the movie makes relatively little comment about the fact everyone is getting with everyone, irrespective of gender or where in the food aisles the characters come from. It may be animation, but it’s surprisingly non-judgemental and makes relatively little comment about the fact that sexuality-wise it’s a bit of a free-for-all.

There is one nasty moment that’s played out as a male-on-male rape, but it doesn’t pretend it isn’t wrong and unpleasant. When there are gay jokes, such as Firewater (Bill Hader) talking about being ‘Bang-a-guy stoned’, it’s merely treated as a funny observation with the butt of the joke being straight people’s hang-ups about experimentation, rather than laughing at the idea that someone might do something gay, which is typically how that sort of joke comes across. Sausage Party might have vocal points to make about religion and culture, but on the sexuality front it’s a very accepting, where everyone could and should be able to do what they want, and it’s nice that the movie doesn’t feel the need to make a giant fuss about it.

It is, of course, because all the characters are animated food that it can do this, including quite how explicit it is about the gay stuff that’s going on. It may be inadvertent, but the fact a sausage screwing a bun is as odd as a lavash banging a bagel, allows it to level the playing field in sexuality terms in a surprising way. And I do think it’s inadvertent, as when you watch the actors in the recording booth in the special features, a lot of the LGBT content does seem to be about them trying to shock and make each other laugh, with the joke being that it’s funny because it’s gay or bisexual. However, on screen, when absolutely everything is so crude, extreme and set in such a bizarre world, Sausage Party may well rank as one of the most sexually accepting Hollywood releases ever.

That said, as that LGBT acceptance is wrapped in such a smorgasbord of insanity, the movie’s attitude towards sexuality is probably not what most people will think about when they watch Sausage Party. And that insanity ranges from Saving Private Ryan inspired moments of spilled food to the machinations of a revenge obsessed douche who’s furious he won’t be able to do for a lady what he was designed for, with a side order of food-based mega-violence and some Stephen Hawking-esque chewing gum.

All that may make it sound like Sausage Party is an absolutely hysterical laugh riot, but overall it’s perhaps not quite as funny as it might have been. There are some absolutely inspired moments and more than a few belly laughs, but it’s also a little flabby around the edges, and the plot stretches into too many subplots and different places to have the focus that it really needs. It means that while it’s a lot of fun, it keeps reaching for profane genius but never quite gets there. There are far worse things you could say about a movie, ensuring Sausage Party is still worth a watch – but only if you don’t mind the depths of food-based crudity.

Overall Verdict: Completely insane and often very funny, Sausage Party may not be a complete triumph, but it may, bizarrely enough, be the most uninhibitedly gay/bisexual Hollywood movie ever made.