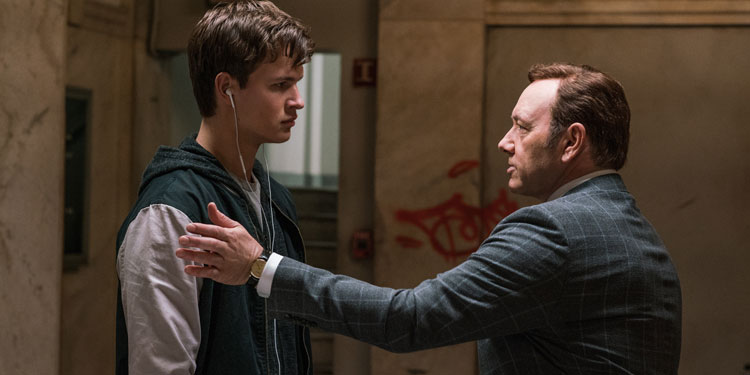 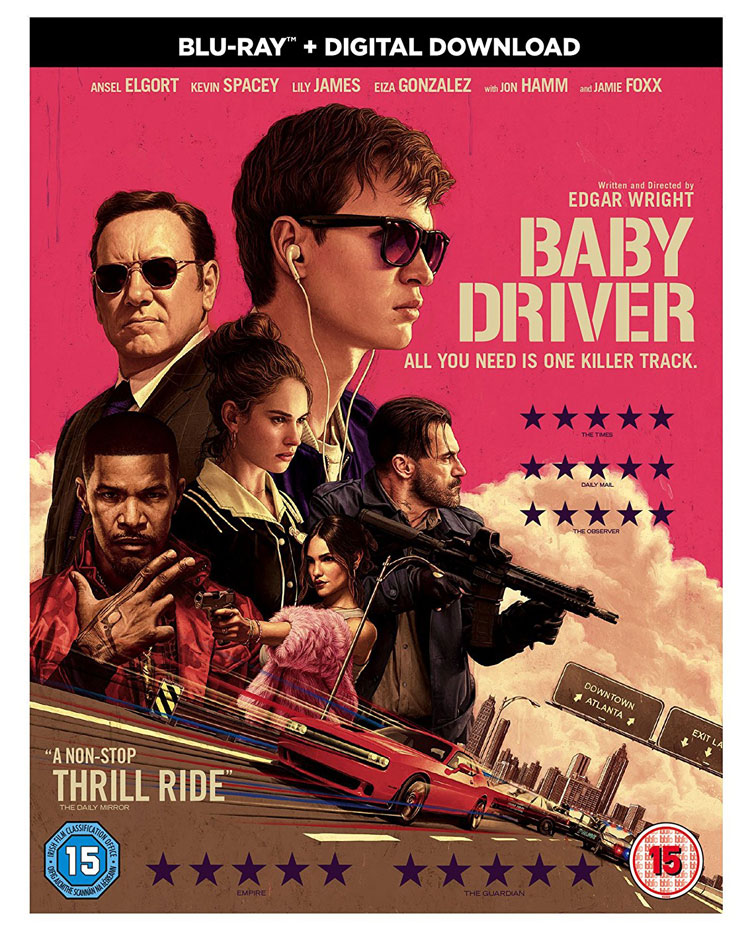 Thankfully though, the presence of the disgraced actor doesn’t completely overshadow the movie, which got great reviews and word of mouth on its cinema release for reasons that had nothing to do with Spacey.

Baby (Ansel Elgort) is working as a getaway driver for crime boss Doc (Spacey). He doesn’t want to be, and is hoping he will soon be out from under the thumb of the criminal. However, Doc wants to keep him around because he’s so good at what he does. He’s a man able to get away from the cops and turn a car on a dime to ensure that no matter what may have happened during a heist, they won’t get caught.

Having narrowly escaped from two different heists, Baby thinks he’s out of the criminal life – but Doc pulls him back in for one more job, which involves robbing a post office. He’s teamed up with the violent and potentially unstable Bats (Jamie), along with the Bonnie & Clyde-esque couple, Buddy and Darling (Jon Hamm and Eiza González) – a combination that’s potentially explosive and dangerous. As the heist gets closer, it looks like there’s no way it can succeed, and that Baby could easily end up getting killed.

Mixed into all this is Baby’s fledgling relationship with waitress Debora (Lily James), who brings out a new side to the usually quiet young man, who spends most of his time listening to music and not speaking, in order to drown out his tinnitus.

As many had hoped from the time direct Edgar Wright started talking about it several years ago, what helps set Baby Driver apart is the Hot Fuzz and Scott Pilgrim helmer’s unique sensibility, helping to make it a film that’s both familiar and not quite like anything you’ve ever seen before. Wright takes the tropes of a heist/car chase movie, and then twists things into something new. In one of the featurettes someone talks about how Wright told them to look at it less like a car chase film and more like a musical, and that’s exactly right.

The characters may not burst into song, but huge amounts of the film are choreographed to classic tunes – from Queen to T.Rex. And while plenty of other directors have used pre-existing music to create a particular style and feel, here the action is literally choreographed to the music. Guns fire to the beat, cars drift round a corner in time to the music and gears shift like it’s a dance. Even when it’s not a car chase, the action often moves to the music, even if technically it’s only supposed to be Baby who’s listening to it on his iPod.

The non-stop – and exceedingly eclectic – mix of songs and the way they’re edited to the action, creates a hyper-real atmosphere. That also extends to the 50s musical style romance between Baby and Debora, where love is told in bright primary colours. Although there are moments when it feels like Wright is trying just a little too hard and is on the verge of overstuffing things to the point of explosion, Baby Driver always pull itself back, or produces a virtuoso sequence that shows there’s method in the madness. That said, while much of the editing is exceptionally well done, a bit of judicious cutting to the runtime wouldn’t have gone amiss (something that’s also been true of Wright’s other movies).

The hyper-real atmosphere also helps ensure that while some aspects of the films could have come across as more nasty than entertaining, the violence and unpleasantness of some of the characters never becomes too off-putting – even if it gets close at times.

Purchase from
Amazon.co.uk
It also helps that the acting is good, with Ansel Elgort putting in a charming performance in the central role – managing to make Baby seem like a charming and sweet young man stuck in a difficult situation, despite the fact he has plenty of complicity. He’s backed up by great turns from Jamie Foxx (channelling a similar vibe to his character in Horrible Bosses, and most particularly Jon Hamm, who’s incredibly intense playing against type as the driven and utterly amoral Buddy.

Overall Verdict: Some reviews have gone over the top, calling Baby Driver a genre game-changer. It’s not quite that, but it’s a fun, idiosyncratic movie crime thriller that should put a smile of your fane.