Having taken us all around the world, Boys On Film returns to Britain for its 15th outing, Time & Tied. However, while sticking with one country, it doesn’t skimp on the quality, showing there’s a hell of a lot of good gay-themed short films being made in the UK.

Boys On Film 15 presents nine shorts which range from the award-winning Closets and the sexy, provocative G’Oclock, to time capsule of Polari that is Putting On The Dish, and a film many thought we’d never see, Trouser Bar.

But are they worth watching? Take a look below for our thoughts. And you can see what we think of other Boys On Film releases here. END_OF_DOCUMENT_TOKEN_TO_BE_REPLACED 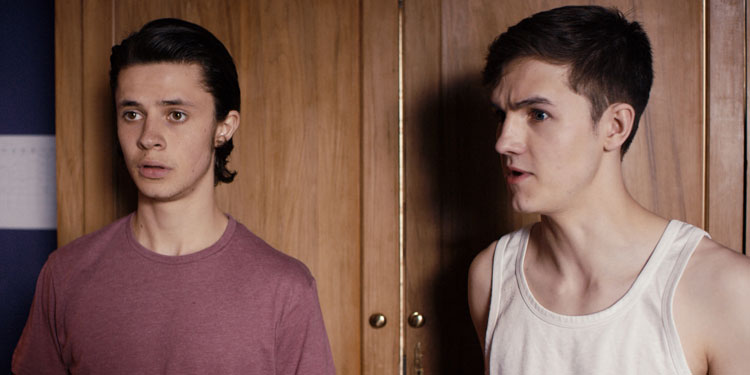 Henry (played by Tommy Lawrence Knight, of The Sarah Jane Smith Adventures), a drag-loving 16-year-old living in 1986, is transported, via his wardrobe, to 2016, where he meets Ben (Cucumber’s Ceallach Spellman), a gay teen with problems of his own. Together they find solace and hope in each other’s stories, and the knowledge that they aren’t alone. The performances between the two boys is wonderful, and their interaction is in turns both touching and funny. Suffering slightly in the end scene, Closets is a coherent and enjoyable piece of queer cinema that’s obviously designed to inspire and provoke debate in younger viewers. END_OF_DOCUMENT_TOKEN_TO_BE_REPLACED