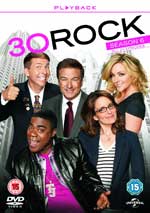 I’ve never quite worked out why Comedy Central shows 30 Rock in the way they do in the UK, where we tend to get it in half season chunks (sometimes with the second half of one season and the beginning of another shoved together). It means that while 30 Rock – Season 6 ended in May 2012 in the US, it’s only just come to a conclusion on British TV, and so now we can get the 22 episodes on DVD. END_OF_DOCUMENT_TOKEN_TO_BE_REPLACED