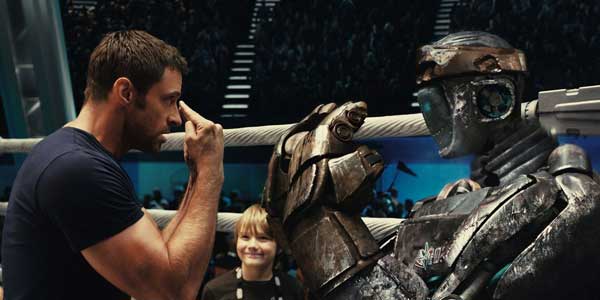 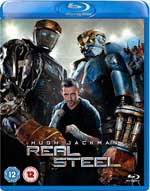 I’m not a big fan of the people who like to say everything about modern Hollywood is rubbish and films were better in the past (largely because if you look at it objectively, it’s nonsense), but one thing a lot of big Hollywood flicks do seem to have lost in the last few years is real heart. It’s as if a fear of being labelled sentimental or phoney has ended up with films that don’t even try to tug on your heartstrings or really engage you emotionally. It’s nice then when a film comes along that wears its heart of its sleeve and isn’t afraid to be a full-on, feel-good, heartwarmer.

That said, if you wanted to criticise Real Steel, you could certainly do so on the grounds of plot, as those who like to moan that Hollywood has run out of ideas will find much to bitch about. It’s basically a film about a father connecting with a child he’s estranged from (of which there have been many), mixed with a pretty standard sports underdog story (of which there have been thousands), with robots added in to make us feel like we haven’t seen this all before. And do you know what? It works.

Hugh Jackman is Charlie Kenton, a former boxer who was left behind when robots took over from humans in the ring. Now he goes from fight-to-fight with broken down bots, desperately hustling to try and make ends meet. Into his precarious existence comes Max (Dakota Goyo), the 11-year-old son he’s had nothing to do with. Max’s mother has died, and in return for $50,000, Charlie agrees to look after his son for a few weeks before signing custody over to Max’s aunt.

Father and son don’t exactly hit is off, with Max furious at his father, especially when he discovers he’s essentially been sold to his aunt, and Charlie having no idea how to deal with children and resenting the kids’ intrusion into his life. However they do manage to find a common point of interest in boxing. Max comes across a dilapidated, outdated sparring bot called Atom, and while Charlie thinks the machine doesn’t have a chance in hell of winning anything, father and son slowly start to come together as the plucky robot massively outperforms expectations and may get a shot at the championship.

Filled with great special effects, wonderfully kinetic robot fighting and never standing still, Real Steel is immensely entertaining. The basic story may be pretty hackneyed, but it works, largely because everyone involved seems so committed to it. It’s also not afraid to be surprisingly emotionally dark at time either. Some of the exchanges between father and son early on are pretty emotionally brutal, with Hugh Jackman’s Charlie not holding back on letting the recently bereaved Max know exactly what an imposition he’s being.

Indeed it’s the roughness of their early relationship what makes the final heartwarming scenes pay off so well – plus the fact it’s tough to make a sports underdog story that doesn’t heat up some heart cockles. Director Shawn Levy (best known for the Night At the Museum movies) holds things together extremely well and this is undoubtedly his most accomplished movie yet. The whole thing may be ridiculously predictable – and young Dakota Goyo may look and sound way too much like Jake Lloyd in The Phantom Menace – but it works.

It also looks great on Blu-ray, with the HD transfer really showing off how good the robot effects are. Most of the time CG is pretty obvious, but here it’s absolutely seamless and the bots look utterly superb at 1080p. It’s a vibrant, good-looking film and Blu-ray is certainly the way to watch it.

There’s also some decent things amongst the special features, which go for quality rather than quantity. ‘Countdown To The Fight’ is a fun idea, treating the whole movie as if it were real, with this being a documentary about Charlie’s rise. There’s also a trio of ‘making of…’ featurettes, each of which is well worth a look. They range from a look at the complex Metal Valley sequence, where Max first finds Atom, to Sugar Ray Leonard’s involvement in the film, who helped train Hugh Jackman and who also worked on the robot fight moves.  It all ensures it’s a disc that certainly packs a wallop.

Overall Verdict: It may not be a knockout on the originality front, but it certainly hits hard in the heartwarming stakes, as well as delivering intense robot fight action.