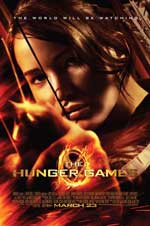 The Hunger Games is set in North America in a dystopian future. The Hunger Games have been introduced by the government as a tactic invented to help control and punish each District for a previous uprising. Each of the 12 Districts have to select a male and female teenager, who must then all fight each other to the death in a televised event, for the honour and hope of their Districts.

During the selection process for the 74th Games, 16-year-old Katniss Everdeen (Jennifer Lawrence) heroically takes the place of her sister and volunteers for the games. She is then sent to the Capitol along with fellow Tribute Peeta (Josh Hutcherson), going from poverty in District 12 to a lavish and visually stunning metropolis. Once there, each Tribute must train and parade themselves in front of the media, attempting to become favourites, before being sent to the games themselves.

Many of the tributes are humble in comparison to the organisers of the Games, but the contrast is what makes the film work. We are transported from poverty to decadence, where each city dweller lives life to excess, feeding off the poor and living vulgar, self-indulgent lives. This is captured well and is reflected in their exaggerated and grotesque appearance and clothing.

Katniss is played brilliantly by Jennifer Lawrence (of Winter’s Bone fame), and leads an ensemble who are all excellent and very believable in their roles. The film itself doesn’t feel overlong at 142 minutes. The first half spends time setting up why the games take place, the selection process and transferring both tributes from District 12 to the Capitol, whilst the second half deals with The Games themselves, where bonds are made and broken as each tribute battles for survival rather than glory.

With a budget of around $75million, noticeable effects are kept to a relative minimum. We are given the odd spaceship and monster, but rather than being bombarded by CGI fireworks, we are instead treated to a lavish setting as well as well as amazing costumes and make up. Ultimately what drives this film and makes it a superior sci-fi, is that it is character driven. We care about the individuals, whether we love or hate them.

And for any parent wondering whether a movie about a fight-to-the-death tournament will be suitable for the kiddies, those dispatched during the games are sent off with dignity and not too much bloodshed (some blood was even removed for the UK release to ensures a 12A certificate), for a more age friendly target audience.

Whilst the casting is genius, the stand out roles other than the Tributes are Woody Harrelson who plays Haymitch – a previous winner from District 12 who is now their mentor even though he’s a drunk – and Elizabeth Banks as the awful Effie Trinket, who selects and guides the Tributes from District 12 to their destiny.

There are obvious nods to Big Brother, The Running Man and Battle Royale, but despite these comparisons the film still seems fresh and exciting.

Overall Verdict: The Hunger Games is an exciting new franchise, and although a trilogy of books it will probably be split into four films (similar to Potter and Twilight). I personally cannot wait to see the next film and will be picking up the next book! If fans of Twilight are Twihards does this make me a Tribute? I can certainly say that The Odds are in Favour of this having a new legion of fans, and will become a huge box office smash!