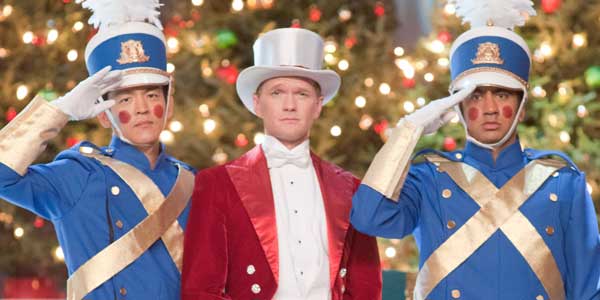 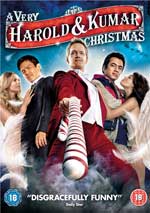 When Kal Penn (aka Kumar) went off to work for Obama at the White House (yes, that really happened), it seemed that would be the end of Harold and Kumar. However he left his job in the President’s communications department and so the stoners have returned for a festive adventure. In cinemas they even went 3D, and indeed if you’ve got a 3D Blu-ray player and the right TV, you can enjoy a third dimension in the home, but if you’re going with DVD, you’ll have to enjoy the movie in good old 2D.

While with most films it doesn’t really make much difference if you watch them in 2D or 3D, it’s definitely noticeable with A Very Harold & Kumar Christmas, as every few minutes there’s a brief slow-mo shot where things should be flying towards you. They seem a bit odd in 2D (indeed it harks back to watching 50s movies that were originally shot in 3D, such as Kiss Me Kate, where similar things happen), but it certainly doesn’t ruin the enjoyment of this silly, very episodic and yet unexpectedly entertaining movie.

It’s several years on from Harold & Kumar Escape From Guantanamo, and the titular duo have drifted apart. Harold is now married and an upright businessman, while Kumar is still a major stoner shirking all responsibility. When a package turns up at Kumar’s house, which is addressed to Harold, he heads off across town to give it to his old friend. Inside the parcel is a massive joint, which ends up accidentally burning Harold’s Christmas tree to the ground. This isn’t just any Christmas tree, it’s Harold’s wife’s father’s tree. He’s a rather scary man (when has Danny Trejo ever played anything else?) who’s a bit obsessed with this particular Christmas tradition.

Harold’s wife and dad won’t be back from Midnight Mass until 2am, and so Harold & Kumar end up on a trek around the city looking for a replacement tree. Their odyssey takes them from the party of a Russian mobster’s daughter (who’s desperate to lose her virginity) to taking part in a Broadway extravaganza featuring their old friend, Neil Patrick Harris.

You’d have thought Harold & Kumar would be a joke that had run its course by now, but the script manages to walk the tricky line of keeping what people liked about the first two films, while moving the characters forward so that it still feels fresh. It also ensures that in amongst the drugs, gross-out jokes, general rudeness and often rather surreal scenarios, it has real heart.

The film is far from perfect and quite a few of the jokes fall completely flat. For example the idea of a toddler accidentally getting hopped up on a series of drugs is funnier in theory than practice, and the movie’s episodic nature inevitably results in some sections being a lot weaker than others. Overall though it’s surprisingly successful, especially for a third instalment. It helps that the movie has managed to keep the same screenwriters as the first two movies, even if Jon Hurwitz and Hayden Schlossberg couldn’t direct this one as well, as they’d agreed to helm American Reunion.

It’s not a life-changing film, but if you like silliness that lacks the slightly mean-spirited edge of a lot of recent gross-out comedy, there’s a lot to enjoy here. It’s ultimately a movie about the importance of friendship, and while it goes to a lot of strange place – from accidentally shooting Santa to getting your dick stuck to an icy pole (as well as an incredibly peculiar stop-motion interlude) – it’s a lot of fun.

Once more the highlight is the appearance of Neil Patrick Harris, who again plays a ridiculously OTT version of himself. He reveals that he’s only pretending to be gay to get more women in the sack (his hubby David Burtka also makes an appearance). You may be wondering how he reappears after what happened to him in the earlier Harold & Kumar movies, but there’s a bizarre but funny interlude in heaven to explain it.

Overall Verdict: An immensely silly movie that’s also a lot of fun. It’s good to have Harold & Kumar back, and nice that they’ve retained their heart.