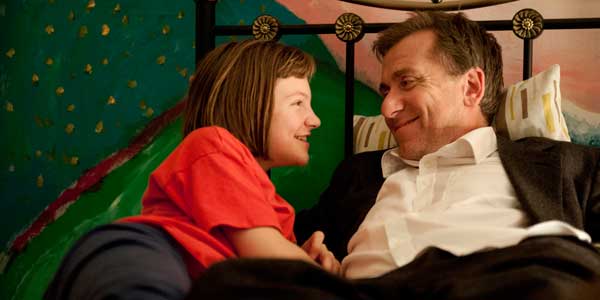 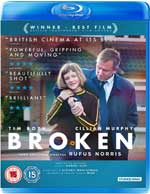 Broken won Best Film at the British Independent Film Awards and got much praise on its cinema release. However I couldn’t help feeling it’s one of those movies where grittiness and being a bit of a downer is taken for it being ‘real’ and worthy. It’s certainly dramatic and very, very well-acted, but it’s still pretty contrived and looked at objectively, the events are fairly soap opera-ish.

The movie is told through the eyes of young Skunk (Eloise Laurence), who’s just moving from primary to secondary school. She lives with her loving dad, Archie (Tim Roth), brother Jed (Bill Milner) and housekeeper Kasia (Zana Marjanovic). Skunk witness a terrifying act of violence when neighbour Bob Oswald (Rory Kinnear) beats the mentally challenged Rick Buckley (Robert Emms) to a pulp. Bob found a condom wrapper in his house, and in order to stop him smashing the TV one of his feral daughters says she had sex with Rick – hence the beating.

The film then uncovers the lives of the three families who all live at the end of a cul-de-sac. Bob Oswald seems incapable of seeing the bad in his daughters, even though they run riot and are in desperate need of an ASBO. The safe, middle-class Buckleys attempt to deal with Rick, who increasingly starts to wonder if he is a bad as the Oswalds keep screaming that he is. Archie meanwhile wants to give a loving home to his children and keep them safe. However with the world around them a dangerous place, that’s tougher than it ought to be.

Broken tries to cram a lot into 91 minutes, which is both a plus and a minus. It ensures it always keeps your hooked in, but after a while it’s difficult not to feel things are getting slightly contrived and over the top. Part of the issue is that it seems to be a pretty much self-contained universe at the end of this residential road, with only a few other characters coming in, such as Cillian Murphy’s teacher Mike, and a couple of other locations. Slightly divorced from society at large it feels less like a microcosm than a conveniently brought together set of people. Even things like the mentioning of Skunk’s diabetes feel like slightly heavy-handed foreshadowing.

In the special features director Rufus Norris constantly uses the word ‘uplifting’, to the point where you get the impression he’s protesting too much. While the film tries to show the core of love between people even when things around them are broken, this is not a movie I would describe as uplifting – melodramatic perhaps, but not uplifting.

However what it does have massively in its favour is the cast. Tim Roth, in his first British movie for a few years, is as good as you’d expect, as is Cillian Murphy in a potentially tricky role. Rory Kinnear meanwhile furthers his claim to being one of the best actors working today as an incapable, rather stupid brute, who’s nevertheless doing his incredibly limited best. Even with them, it would have completely collapsed without some great kids in the younger role. Martha Bryant is terrifying as the bullying, violent, uncontrollable youngest Oswald child, but it’s Eloise Laurence who’s truly amazing. The 12-year-old puts in a truly astonishing performance in the central role, lending the film an air of innocence that is sadly pulped out of it towards the end due to the rather extreme events.

Broken is certainly not a bad movie and indeed each of its constituent parts is actually quite powerful, but in trying to cram them all together into one movie, it comes across as a bit extreme.

Luckily though it looks and sounds good on Blu-ray. It’s also worth watching the interviews and Q&A that’s included on the special features.

Overall Verdict: Extremely well-acted and director Rufus Norris is definitely a director to watch, but while it sure fits in a lot of gritty, rather dark drama, it all comes across as a little too contrived to fully work.