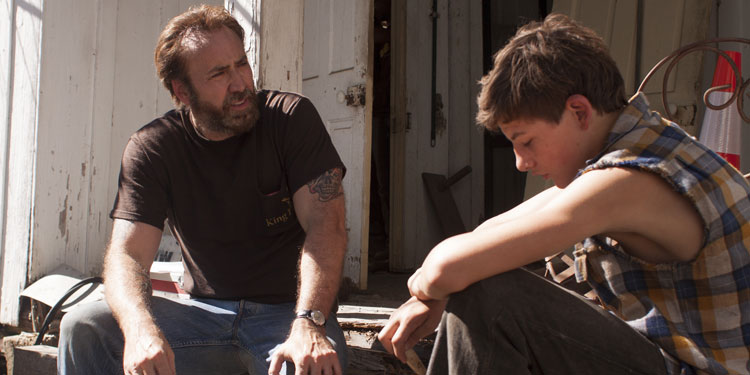 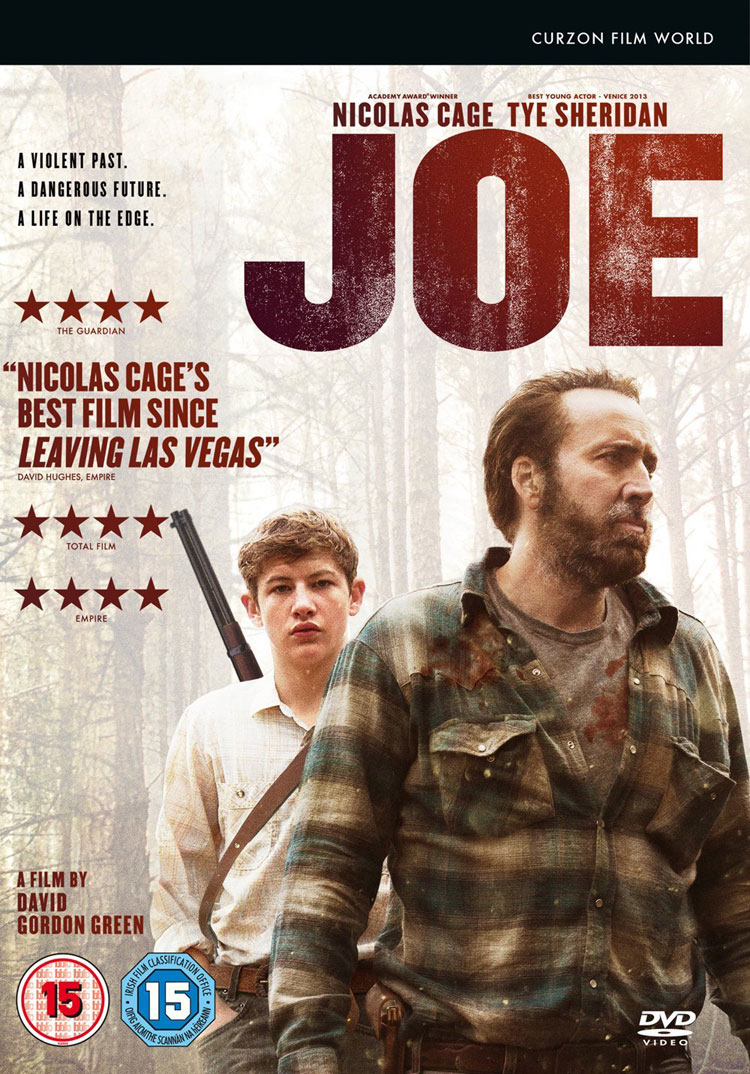 Joe gives us something a little different, with Cage playing title character Joe Ransom, a character who spends much of the movie trying to keep a lid on the fiery, violent temper that lies underneath. It was an extremely smart move to cast the actor, as you can genuinely feel Cage pulling in the tics and extreme tendencies he has shown in endless movies in the last few years.

Joe is a man with a past but now he’s got a job leading a crew of men who go around killing trees, as that’s the way timber companies get around a law that says they can only chop down dead wood. He’s still extremely rough around the edges but he’s doing his best to keep his explosive temper under control so that he doesn’t end up back in prison once again.

Then he meet young Gary (Tye Sheridan), who comes to him desperately wanting a job. Joe takes a chance on the young man, who comes from an extremely difficult background, with a violent, alcoholic drifter father who sees Gary as a burden even though he’s pretty much dependent on his son.

Through a series of difficulties, both with Gary’s dad and a shady local who decides he wants revenge on both Gary and Joe for slights he thinks he’s suffered, Joe becomes an unexpected mentor to the young man, who may possibly offer him a route to redemption.

Joe is a hard-nosed film full of rough, grimy characters who are living out in the middle of nowhere because nowhere else would have them. It doesn’t pull its punches, particularly with the title character, who really is a brute even if he’s trying not to be – in fact there’s one scene in particular where animal lovers may find it difficult to forgive him.

The mixture of the fact that he really wants to be a better person – even if he doesn’t know how to do that – and Gary’s honesty and general goodness in a sea of violence and depravity certainly make you root for them. Sheridan, who’s best known for playing a fairly similar character in Mud, is extremely good as Gary, giving the boy a raw honesty and simple desire for a decent life that’s very affecting.

There’s also a powerhouse performance from Gary Poulter as Gary’s father. Pouler was a real-life drifter who director David Gordon Green found during an open audition. He’s not always easy to understand but boy does he feel like the real-deal; at turns unbearably sad and at others a horrifically appalling human being whose amorality literally knows no bounds. Tragically though, not long after Joe was filmed, Gary died and so he never saw the performance that was almost certain to have opened doors for him.

There are a few issues, not least that as with many other redneck/Southern Gothic movies, the fact nearly every character is pretty foul – even the ‘good’ ones – tips it towards hyperbole at times (perhaps the people who do live in the backwoods of the US South needs to set up organisation that’s devoted to telling the world they’re not all that bad). There are also a few plot points that are a little too convenient for their own good, but none of that detracts from the central power of what is a very good movie.

For the last few years David Gordon Green has been in Hollywood making studio comedies such as Pineapple Express and Your Highness, but before that he was fast becoming one of the most interesting voices on the indie scene with the likes of George Washington and All The Real Girls. He also made the excellent Undertow, a film that shares a lot in common with Joe and which showed that Green had vast amounts of promise as a serious and very human director. It’s good to know that his time in Hollywood hasn’t dulled the spirit of what he achieved with his early movies.

Overall Verdict: You may end up thinking that surely not everyone in the backwoods of the US south can be as dreadful as most of the characters here, but Joe is a powerful and surprisingly moving tale, with Cage showing that a bit of restraint can work wonders for his performance.