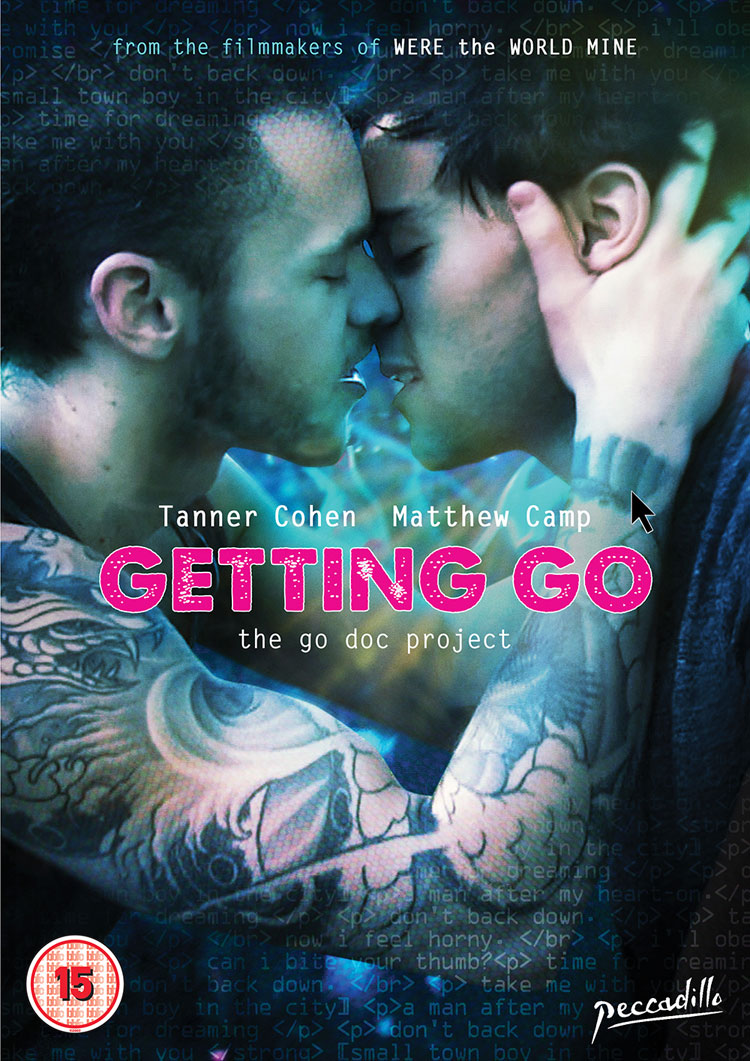 The film follows Doc (Cohen), who decides to combine his fascination with a New York go-go boy and his filmmaking aspirations by making a documentary about the sexy dancer. Having watched him for weeks and secretly photoshopped pictures of him, Doc approaches Go (Matthew Camp) with his filmmaking idea. To his surprise, Go agrees to be the subject of the documentary and they start making the film. END_OF_DOCUMENT_TOKEN_TO_BE_REPLACED

Tanner Cohen gained a huge amount of fans after he played the lead role in the gay-themed musical Were The World Mine. However except for brief appearances in the likes of Looking, we haven’t seen too much of him since (although he’s certainly been busy). Now he’s back with Getting Go: The Go Doc Project, which is released on DVD and VoD in the UK on June 23rd.

In the movie Tanner plays Doc, a young man fascinated by go-go dancer Go. After Doc gets Go to agree to be the subject of a documentary he wants to make, their relationship develops in unexpected directions.

Yesterday we posted our chat with Getting Go star Matthew Camp, and we were also fortunate enough to chat to Tanner about the film and what he’s been up to since Were The World Mine. He also made us wonder just how close him and Matthew got! END_OF_DOCUMENT_TOKEN_TO_BE_REPLACED

If you’ve hung around on Tumblr for any length of time, there’s a good chance that Matthew Camp will have come across your dashboard, even if you weren’t aware of who he was. Matthew is a go-go dancer, whose incredible body and good looks have ensured plenty of photographers have been pleased to get him to model for them.

However he’s a bit of a polymath, as he also makes his own fashions and even has a perfume he created. Now only that but he’s now turned to acting, starring alongside Tanner Cohen in the excellent Getting Go: The Go Doc Project, which reaches DVD in the UK on June 23rd.

We had the chance to chat with Matthew about his eclectic life and his attitude to sexuality, as well as making a movie where he essentially plays a caricature of himself. END_OF_DOCUMENT_TOKEN_TO_BE_REPLACED

Fans of Were The World Mine might wondering what’s happened to that film’s star, Tanner Cohen has been up to. The actor/writer/musician recently popped up in an episode of Looking, and now he’s got the starring role in Getting Go: The Go Doc Project.

Here’s the synopsis: ‘College boy Doc (Tanner Cohen, Were The World Mine) is obsessed with a well-known NYC go-go boy (Matthew Camp). He befriends his hunky crush with the intention of shooting a documentary about what it’s like to live in his skin.

‘But as they grow closer, flirtation blurs the line between subject and filmmaker until a steamy night together solidifies deeper feelings. Cory Kruekeberg’s explicit directorial debut explores the thrill and danger of getting exactly what you wished for.’

It look pretty hot and entertaining, so watch out for it when it hits DVD in the UK on June 23rd. END_OF_DOCUMENT_TOKEN_TO_BE_REPLACED

Given how the musical is known for being popular with gay people, it’s surprising there aren’t more film musicals made with a gay bent. There have been a few, such as the superb Hedwig And The Angry Inch, but not as many as you might expect. Were The World Mine follows gay teenager Timothy, who’s routinely castigated for being a ‘fag’ by the rugby players at his school, even though he secretly lusts after one of them.

After being cast as Puck in the school’s musical production of ‘A Midsummer’s Night Dream’, Timothy discovers a way to make the plot of Shakespeare’s fantasy come true, spraying people from a flower so that they fall in love with the first person they see afterwards. Timothy soon manages to make his crush besotted with him, before spreading gayness around his small town  to give the small-minded townsfolk a taste of what it’s like to live in his shoes. END_OF_DOCUMENT_TOKEN_TO_BE_REPLACED