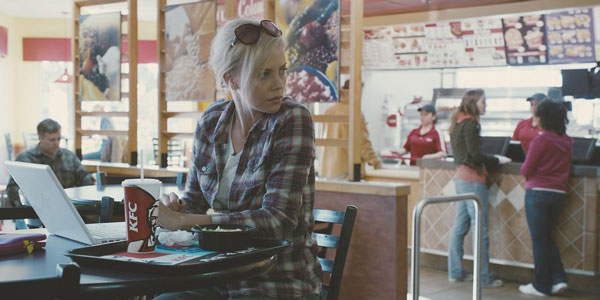 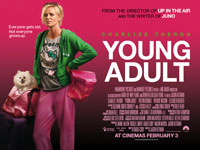 On paper it would appear that Mavis Gary (Theron) is a successful, beautiful 37-year-old writer living life to the full in Minneapolis, who’s enjoying all the trappings that life should bring a former prom queen. However, it is obvious from the opening scenes that her life is in a mess. She wakes up from a drunken stupor, having fallen asleep on her bed fully-clothed. She shuffles round her dishevelled apartment, drinks Coke for breakfast, prepares breakfast for her and her dog Dolce from ready made packet food, whilst watching The Kardashians on TV. END_OF_DOCUMENT_TOKEN_TO_BE_REPLACED

If Hollywood was hoping for a little pre-Christmas cheer, it didn’t get much over the weekend, after disappointing debuts for two movies there’d been high hopes for. Sherlock Holmes: A Game Of Shadows topped the chart with $40 million, more than $20 million down on the first movie’s take during Christmas 2009. It’s even lower than Tron: Legacy, which opened to weak reviews this weekend last year.

As A Game Of Shadows had good reviews and strong word of mouth, it’s not certain what happened to the audience (Warner Bros had been expecting a $50 million+ opening), but it does suggest it’s not just a dearth of decent films that’s causing people to stay away from the multiplex.

Doing even worse was Alvin & the Chipmunks: Chipwrecked, which took $23.5 million, less than half what it’s predescessor made.

The one bright spot at the US box office was Mission: Impossible – Ghost Protocol, which took $13 million in limited released on only 425 IMAX and large screens cinemas. While it suggests the film will do well when it expands onto normal screens later this week, some may worry that the IMAX numbers were heavily skewed by the inclusion of a six-minute prologue to The Dark Knight Rises, and that without that (it won’t be included in normal cinemas), it’s still difficult to know just how well the new Mission: Impossible movie will do.

Hollywood is likely to be worrying a lot at the moment. Studios have spent more than $600 million on movies being released in December, and so far every weekend has been significantly down on the comparable weekend from a year ago. They’re going to be hoping for a stellar period between Christmas and New Year to make up lost ground or it’s going to be a very bad end to a very up and down year.

In recent interviews, Charlize Theron has been having to explain why it’s not important to her if you like her characters, as long as you understand and perhaps empathise with them. The reason she’s been talking about this is because she plays a bit of a bitch in Jason Reitman’s Young Adult (which also reunites him with Juno screenwriter Diablo Cody). Three new clips from the movie have now appeared online, so click above and below to take a look.

Theron plays Mavis Gary, a writer of teen literature who returns to her small hometown to relive her glory days and attempt to reclaim her happily married high school sweetheart (Patrick Wilson). When returning home proves more difficult than she thought, Mavis forms an unusual bond with a former classmate (Patton Oswalt) who hasn’t quite gotten over high school, either. The UK release is due February 12th.