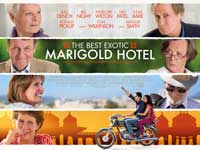 After the phenomenal success of Slumdog Millionaire, it was inevitable that at some point mainstream British cinema would be return to India. The premise of the film is that seven elderly people decide to up-sticks from the UK and go to India, moving into a hotel for the ‘elderly and beautiful’. However it doesn’t quite live up to the image of the photoshopped promos! END_OF_DOCUMENT_TOKEN_TO_BE_REPLACED