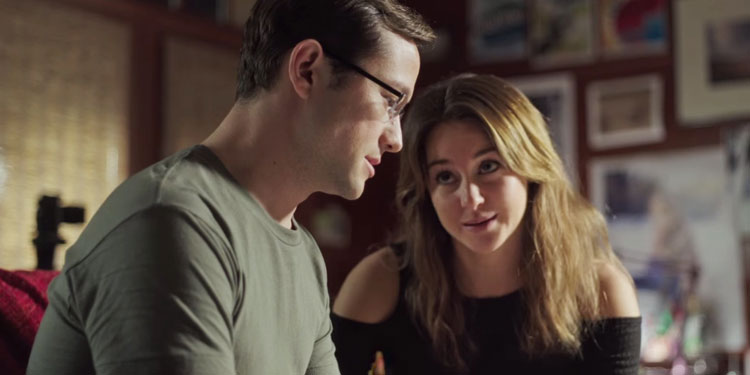 Initially pleased to be helping the US prevent another major terrorist attack, but after working for the CIA and then as an NSA contractor, Snowden becomes increasingly uncomfortable with the massive surveillance network the government has built. Secret projects and operations allow the spying agencies to go far beyond just finding the bad guys, and give them the ability to hide illegal activities and mistakes, and to track pretty much anyone and everything they choose, whether they’ve done anything wrong or not. END_OF_DOCUMENT_TOKEN_TO_BE_REPLACED

Snowden isn’t your usual Comic-Con fare, but the Oliver Stone film had a well-received panel in San Diego, which even included the real Edward Snowden participating via video link. For the rest of us, there’s a new trailer, which you can take a look at below.

Here’s the synopsis: ‘Academy Award®-winning director Oliver Stone, who brought Platoon, Born on the Fourth of July, Wall Street and JFK to the big screen, tackles the most important and fascinating true story of the 21st century. Snowden, the politically-charged, pulse-pounding thriller starring Joseph Gordon-Levitt and Shailene Woodley, reveals the incredible untold personal story of Edward Snowden, the polarizing figure who exposed shocking illegal surveillance activities by the NSA and became one of the most wanted men in the world. He is considered a hero by some, and a traitor by others. No matter which you believe, the epic story of why he did it, who he left behind, and how he pulled it off makes for one of the most compelling films of the year.’

Snowden was originally due to be released at the end of last year, however it was pushed back to September 2016. Take a look at the trailer below. END_OF_DOCUMENT_TOKEN_TO_BE_REPLACED

Jenny (Katherine Heigl) has been with Kitty (Alexis Bledl) for five years, and now she wants to get married and start a family. However, she’s never told her family she’s gay. Now it’s time, but they’re a fairly conservative lot and when she tells her parents, both are shocked and ask her not to tell anyone else.

While neither of them totally reject their daughter, they don’t know how to react, with Jenny’s mother (Linda Emond) in particular not knowing what to do and feeling like she doesn’t really know her child at all, while her father (Tom Wilkinson) is nonplussed but seems willing to reach out – to a point. However, in trying not to let anyone know what’s really going on or to properly deal with it, they begin to create an increasingly tangled web, which comes unstuck when Jenny decides she is not going to hide any longer and won’t pussyfoot around her parents anymore. END_OF_DOCUMENT_TOKEN_TO_BE_REPLACED

To some Edward Snowden is a traitor, while to others he is a hero who blew the whistle of government spying programs. Now Oliver Stone is taking on the tale, with Joseph Gordon-Levitt as Snowden.

Here’s the synopsis: ‘Academy Award®-winning director Oliver Stone, who brought Platoon, Born on the Fourth of July, Wall Street and JFK to the big screen, tackles the most important and fascinating true story of the 21st century. Snowden, the politically-charged, pulse-pounding thriller starring Joseph Gordon-Levitt and Shailene Woodley, reveals the incredible untold personal story of Edward Snowden, the polarizing figure who exposed shocking illegal surveillance activities by the NSA and became one of the most wanted men in the world. He is considered a hero by some, and a traitor by others. No matter which you believe, the epic story of why he did it, who he left behind, and how he pulled it off makes for one of the most compelling films of the year.’

Snowden was originally due to be released at the end of last year, however it was pushed back (not a good sign) to September 2016, although there have been rumours it may get moved back again. Take a look at the trailer below. END_OF_DOCUMENT_TOKEN_TO_BE_REPLACED 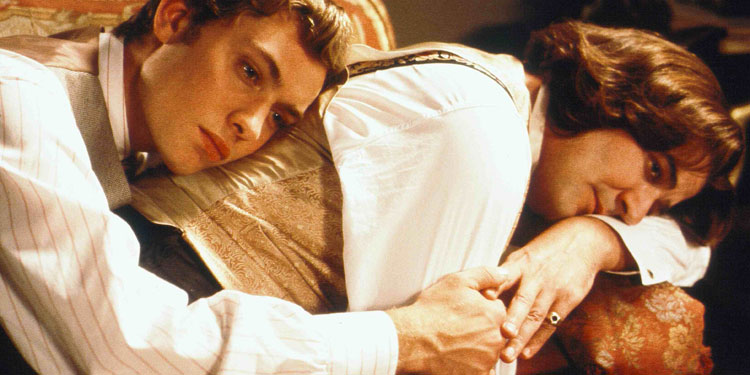 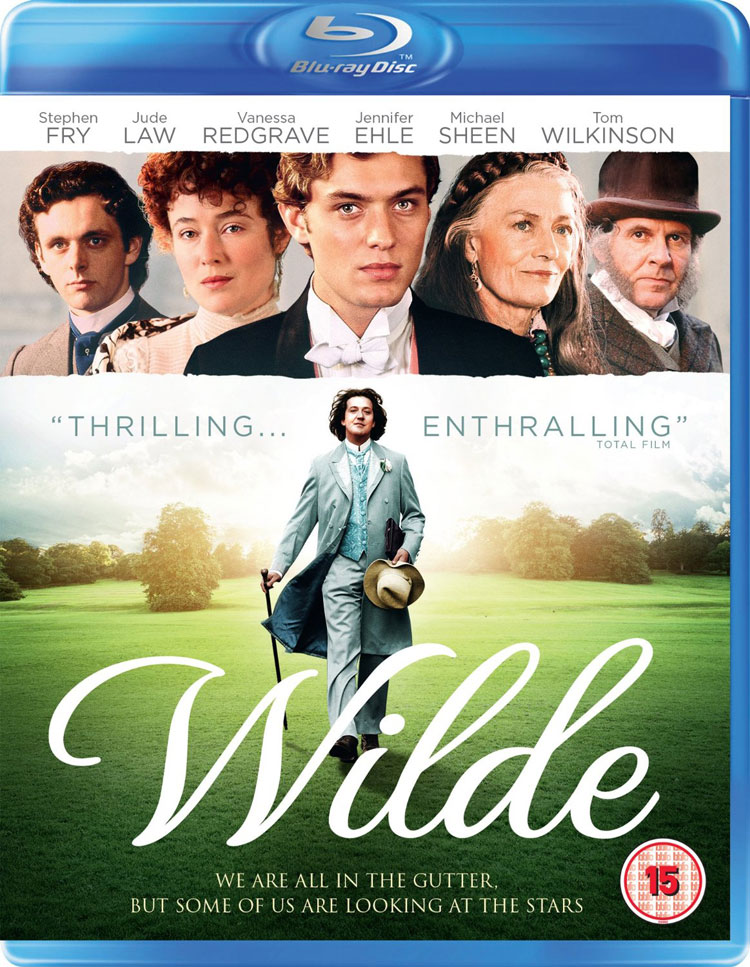 However, there is another side of him, initially brought out by Robbie Ross (Michael Sheen), that seeks the emotional and physical intimacy of men. Oscar begins to see it rather like the Greek ideal, where he is the older man, passing down knowledge to his ‘boys’, as well as sleeping with them. Then he meets the beautiful Lord Alfred Douglas (Jude Law), known as Bosie – and if you’ve ever seen pics of the real Bosie, he was very good looking – and the two fall for one another. END_OF_DOCUMENT_TOKEN_TO_BE_REPLACED

It probably couldn’t be better timing for Jenny’s Wedding that the movie is arriving in the wake of the US Supreme Court equal marriage ruling, as the movie stars Katherine Heigl as a lesbian who’s excited to be marrying her sweetheart (Alexis Bledel).

However, Jenny’s parents have always thought that her new fiancee was her roommate. When they discover the truth they aren’t too happy about it as it goes against their values – something Jenny was aware of and one of the reasons she’d kept their relationship from them.

Tom Wilkinson, Linda Emond and Grace Gummer co-star in the film, which is due out in US cinemas on July 31st (and on VoD the following day).

The trailer for the movie has arrived, which you can take a look at below. END_OF_DOCUMENT_TOKEN_TO_BE_REPLACED

Oliver Stone is pulling his Edward Snowden biopic together. He’s already got Joseph Gordon-Levitt in the lead role, with Shailene Woodley as his girlfriend and Scott Eastwood also set to star. Now three more people are in talks, according to TheWrap.

Zachary Quinto, Melissa Leo and Tom Wilkinson are all in negotiations for key roles. Quinto will be attorney and journalist Glenn Greenwald, who Snowden entrusted with actually leaking the secret US government documents that caused a firestorm when they were released.

Melissa Leo will play Oscar-nominated documentary director Laura Poitras, who made Citizenfour about Snowden and also reported on the leaked NSA documents when they were first released.

Wilkinson meanwhile will play Guardian intelligence correspondent Ewen MacAskill, who was key in actually getting to documents checked and the information they contained to the public.

Oliver Stone will direct from a screenplay he co-wrote with Kieran Fitzgerald (The Homesman). It’s believed it will start shooting soon.

When it was in development it was called Business Trip, but now it’s become Unfinished Business and the first trailer and posters have arrived, which you can take a look at below.

Here’s the synopsis: ‘A hard-working small business owner (Vince Vaughn) and his two associates (Tom Wilkinson, Dave Franco) travel to Europe to close the most important deal of their lives. But what began as a routine business trip goes off the rails in every imaginable – and unimaginable – way, including unplanned stops at a massive sex fetish event and a global economic summit.’

Sienna Miller, Nick Frost and James Marsden co-star. The film is due out in the UK next Marc END_OF_DOCUMENT_TOKEN_TO_BE_REPLACED

You wouldn’t think making a movie about one of the most important moments in the Civil Rights struggle in the US would be that difficult to get off the ground, but Selma faced a massive struggle. Even with Lee Daniels directing and a high profile cast attached (including Hugh Jackman and others), it couldn’t get funding).

Here’s the synopsis: ‘SELMA is the story of a movement. The film chronicles the tumultuous three-month period in 1965, when Dr. Martin Luther King, Jr. led a dangerous campaign to secure equal voting rights in the face of violent opposition. The epic march from Selma to Montgomery culminated in President Johnson (Tom Wilkinson) signing the Voting Rights Act of 1965, one of the most significant victories for the civil rights movement. Director Ava DuVernay’s SELMA tells the story of how the revered leader and visionary Dr. Martin Luther King Jr. (David Oyelowo) and his brothers and sisters in the movement prompted change that forever altered history.’

Selma opens in a few US cinemas on December 25th, 2014, and will go wide in early January. A February 6th UK release is planned. END_OF_DOCUMENT_TOKEN_TO_BE_REPLACED

After decent reports for its film festival screenings, the thriller Felony is now in the run up to its cinema release. While it doesn’t appear firm UK or US dates are set yet, it’s out in Australia on August 28th.

The film stars Joel Edgerton (who also wrote the script) as a decorated police officer, who when driving home after a celebration drink with his team after the long waited bust of a major gang, runs a young cyclist off the road. As he gives CPR to the child, fellow officers arrive to take his statement. In a split second decision he tells them a lie about the accident, which will change all their lives in this edge of your seat thriller.

Jai Courtney is another cop who suspects that Edgerton has been lying, while Tom Wilkinson is the lead police investigator who arrives on the scene following the accident.

Take a look at the first trailer below. END_OF_DOCUMENT_TOKEN_TO_BE_REPLACED