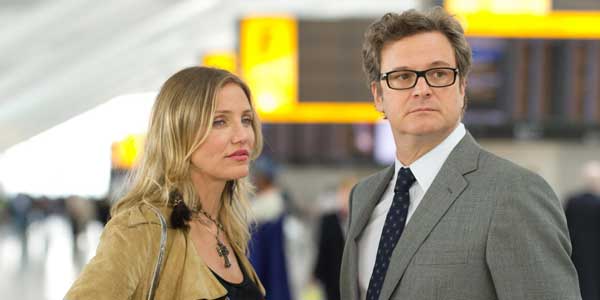 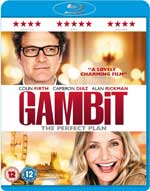 Harry Dean (Colin Firth) is a seemingly dithering art expert working for the cold, abusive Lionel Shahbandar (Alan Rickman). He has a plan to get back at his boss, which involves a lost Monet masterpiece. He gets the Major (Tom Courtney) to paint a duplicate, and schemes to get Lionel to believe that it’s real, but was taken to the US after World War II and since then has been in the possession of a Texan family.

To convince Shahbandar, Harry needs to recruit rodeo rider PJ Puznowski (Cameron Diaz) to pose as the current owner of the painting and demand $11 million for it. Harry will then authenticate the painting and once Lionel’s made the purchase, he’ll give PJ half a million for her trouble. While Harry imagines this will be relatively simple to pull off, things soon spiral out of control, with PJ wondering whether she’s doing the right thing, Shahbandar taking a shine to her and Harry possibly losing his job, meaning he won’t be the one saying whether the painting is real or not.

Gambit is a remake of a 1966 caper starring Michael Caine and Shirley Maclaine. Years ago the Coen Brothers came up with the idea of a do-over and then wrote the script. After that it spent ages in development hell, going from director to director and actor to actor, eventually ending up with Michael Hoffman (The Last Station) at the helm and Colin Firth starring.

You can see why it took a while to come to fruition, because although there’s a great idea behind Gambit, it’s a tricky script to pull off. It’s shot through with the Coen brothers’ style, but without them in the director’s chair, it was always going to be difficult to truly make it work (and may have underwhelmed even with them directing). Hoffman makes a game attempt, but he never quite injects it with the slightly mad energy it needed to really make it come alive. This is apparent early on when Harry is imagining how easy his plan is going to be. The slapstick silliness is present but the direction lacks the slight mania of the script.

It might have seemed like I was saying the script is good but the direction is flawed, but even the screenplay has issues with pacing and narrative. For example a sequence in the Savoy Hotel where Colin Firth loses his trousers goes on way too long and becomes rather tiresome – although once again if it had been given more energy it might have just about worked. But that’s the problem, it’s a farce that never feels quite farcical enough.

It’s something that sticks right through the film, so that while it’s never bad and is often quite entertaining, it’s never quite as fun as it desperately wants to be. Firth, Diaz and Rickman give it their all, but it never fully comes alive.

The Blu-ray looks pretty good though, even if the picture quality isn’t anything amazing. There’s not a massive amount in the way special features, although the ‘making of…’ Featurette that is included is worth a look.

Overall Verdict: A film where it feels like all the right people were involved but it still hasn’t managed to fully come together. A bit more energy and delving into the mania of farce might have made it come alive, but as it is, it’s an okay 90 minutes, although far from a memorable one.