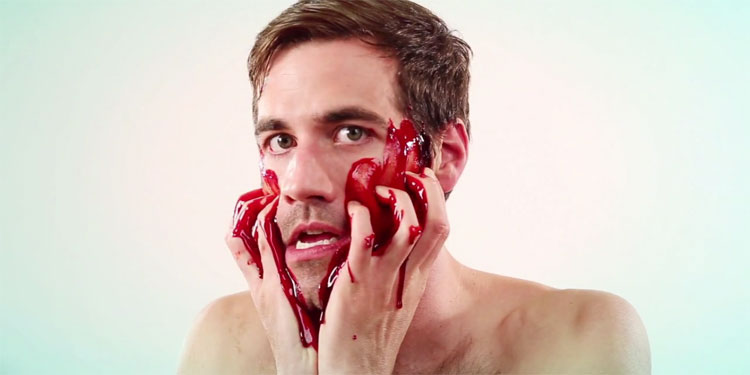 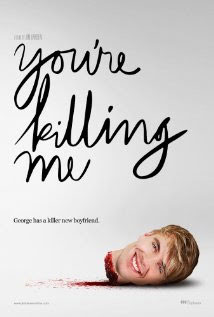 You’re Killing Me sounds like a fun premise, perhaps for a short movie. Indeed, it starts off with what is essentially an entertaining short film. After game night with his friends, Andy (Matthew Wilkas) wants to finally have sex with his new boyfriend, Joe (Matthew McKelligon). However, Joe doesn’t want to, so in desperation Andy says he’ll do whatever kinky thing Joe wants to do. It turns out that what Joe really wants is to murder Andy – which is exactly what he proceeds to do.

However, after this fun beginning, You’re Killing Me has to find something to fill the next 80 minutes with, and that’s where the premise quickly starts running thin.

After getting a rush from killing Andy, Joe decides to set up a meet-stalk with George (Jeffery Self), who stars in a web video that Joe likes as it’s also about murder. Due to that video, in his head Joe thinks it means they’ll get along. They do have an immediate attraction to one another, but only because when Joe starts talking about killing, George thinks it’s just Joe’s strange, dark sense of humour – but he’s hot, so who cares, right?

For Joe this new relationship seems like a breath of fresh air, as he finally has someone he can talk to about how he wants to murder everyone – and he starts to feel much better after he after abandons everything his therapist told him and becomes the killer he’s always wanted to be. George meanwhile is happy to have a good looking new boyfriend, even if he isn’t sure why they’re not having sex.

However, it only takes a few days for George and his friends to start realising that people around them have suddenly gone missing, and that perhaps Joe’s ‘jokes’ aren’t jokes at all.

While it does sound like a potentially fun idea, You’re Killing Me’s main problem is that it is almost the definition of a one-joke movie, and it’s not entirely sure what to do with that joke. There are elements of farce, but it’s not enough of a fun, convoluted romp to completely work on that score. Equally it’s not funny enough to fully entertain as a horror rom-com, and not gory enough for full-on slasher fans.

It plays with various things but never really goes anywhere with them. For example, there are hints that it wants to be a satire about the shallowness of gay culture, as George is a slightly arch, camp guy who never properly hears what Joe says because he’s more interested in himself. Indeed, the only thing he really seems to like about Joe is that he’s hot. However, the movie doesn’t take this very far, with You’re Killing Me seemingly afraid that we’ll turn against George if it completely skewers his superficiality. Likewise, it plays with the rush and joy Joe gets from killing, suggesting that for him it is the equivalent of sex, but there’s little follow-through or development of this idea.

For most of its running time its settles into a pattern of George having not particularly hilarious banter with his friends, Joe killing someone, then Joe telling George about it who dismisses it as a joke – and repeat. Things do pick up at the end when it suddenly develops a proper plot and offers a little tension and a few genuine laughs, but it still doesn’t have an awful lot of logic.

I wasn’t surprised to see star and co-writer Jeffery Self has seen a fair amount of success with web series, while director/co-writer Jim Hansen has mainly made shorts, as all the way through there’s the sense that if you were only watching this for a few minutes at a time it would be quite amusing. However, it sadly doesn’t have what it takes to sustain its running time.

It’s a shame as everybody puts in massive amounts of effort and you can tell they’re really trying to entertain (bringing in the likes of gay-themed entertainment stalwarts Drew Droege and Jack Plotnick certainly doesn’t hurt). Everybody pulls out all the stops, but sadly they don’t have the material or a sense of cohesion to pull it all together, resulting in a movie that even at the end still seems like a fun idea for a film, but sadly this isn’t the movie to really make the most of it.

That said, Matthew McKelligon must be one of the sexiest serial killers in history.

Overall Verdict: Despite a lot of effort, some good actors and a fun premise, You’re Killing Me never quite works out what to do with its set-up beyond a few smiles and an increasingly repetitive joke.