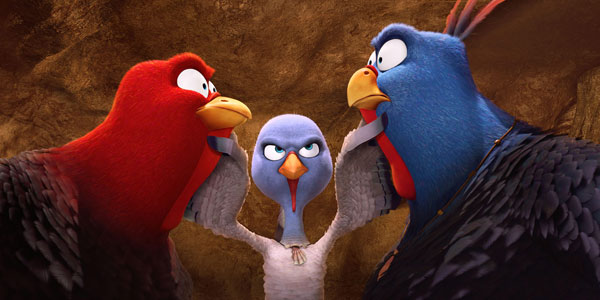 Free Birds seems to have realised this though, so that while non-US youngsters won’t get the nuance of the founding fathers and why turkeys are the preferred meal, it does at least make sure it sets out the basics so they won’t be completely lost. END_OF_DOCUMENT_TOKEN_TO_BE_REPLACED

Paul Potts took the world by storm after he swept to victory in the very first series of Britain’s Got Talent. One Chance takes a look at the story of the mobile phone salesman turned opera singer.

James Corden plays Potts, who grew up being bullied but dreams of singing opera. He thinks he might have his chance when he saves up money to attend a singing school in Italy. However when that doesn’t work out, he’s back in South Wales, stuck in a dead-end job with his unsupportive father telling he needs to give up on his dreams and accept his lot in life. END_OF_DOCUMENT_TOKEN_TO_BE_REPLACED

It was revealed a few weeks ago that a long-planned Alan Partridge movie was finally shooting. Now it’s been confirmed it will be called The Alan Partridge Movie, the first still is here (which you can see above), and you can watch a brand new teaser for the movie below!

Steve Coogan will be joined in the film by the likes of Sean Pertwee, Colm Meaney, Anna Maxwell Martin, Monica Dolan and Dustin Demri-Burns. They team up with Partridge veterans Felicity Montagu, Tim Key, Simon Greenall, Phil Cornwell, Nigel Lindsay and Darren Boyd, who’ll all be back for more madness.

Not too much has been revealed about the plot, other than that it will follow Alan trying to resurrect his flagging media career. Coogan, Neil and Rob Gibbons, Peter Baynham and Armando Iannucci wrote the film, with Declan Lowney directing. It’s currently due out in the UK on August 13th.