It’s four years since Jim Carrey took the lead in a movie, and he’s decided that for his return he should try something rather different. Gone is the zany comedy to be replaced by a grey beard and a serious murder mystery.

Here’s the very brief synopsis: ‘A murder investigation of a slain business man turns to clues found in an author’s book about an eerily similar crime. Based on the 2008 article “True Crimes – A postmodern murder mystery” by David Grann.’

Carrey stars alongside Charlotte Gainsbourg, Marton Csokas with Alexandros Avranas directing. The film is released on DirecTV in the US on April 19th before arriving in cinema/VoD on May 11th. It’s not know when it will arrive in the UK. Take a look at the cinemas below. END_OF_DOCUMENT_TOKEN_TO_BE_REPLACED

It’s not a good day when you end up a in wasteland inhabited by bloodthirsty cannibals. However, in The Bad Batch there’s an area of Texas that’s no longer Texas, as it’s been abandoned by the United States and they’re having nothing to do with anyone who enters it – and that’s at least partly due to the cannibals.

Plus, Keanu Reeves shows up as a cult leader.

For what sounds like a low-rent horror movie, The Bad Batch has a surprisingly good cast, with Reeves joined by Jason Momoa, Giovanni Ribisi, Jim Carrey, Diego Luna and Suki Waterhouse. It got an interesting but mixed reception at the Toronto International Film Festival, but it certainly sounds like it might be worth a watch.

Here’s the synopsis: ‘The highly anticipated follow-up to [Ana Lily] Amirpour’s acclaimed directorial debut, A GIRL WALKS HOME ALONE AT NIGHT, THE BAD BATCH follows Arlen (Waterhouse) as she is unceremoniously dumped in a Texas wasteland fenced off from civilized society. While trying to orient her unforgiving environment, she is captured by a savage band of cannibals and quickly realizes she’ll have to fight her way through her new reality. As Arlen adjusts to life in ‘the bad batch’ she discovers that being good or bad mostly depends on who you’re standing next to.’

The movie is due out in the summer. END_OF_DOCUMENT_TOKEN_TO_BE_REPLACED

After decades of waiting and promises, Dumb And Dumber To, starring Jim Carrey & Jeff Daniels is coming soon, and to prove it we’ve got the trailer and poster!

Here’s the synopsis: ‘Jim Carrey and Jeff Daniels reprise their signature roles as Lloyd and Harry in the sequel to the smash hit that took the physical comedy and kicked it in the nuts: Dumb and Dumber To. The original film’s directors, Peter and Bobby Farrelly, take Lloyd and Harry on a road trip to find a child Harry never knew he had and the responsibility neither should ever, ever be given.

‘The Farrelly brothers produce Dumb and Dumber To alongside Riza Aziz and Joey McFarland of Red Granite Pictures. They are joined by fellow producers Charles Wessler and Bradley Thomas. Universal Pictures will distribute the film in the United States, Canada and select international territories.’

The word from early test screenings is good, so hopefully there will be a lot of laughs when it arrives in cinemas in November. END_OF_DOCUMENT_TOKEN_TO_BE_REPLACED

Rather like Anchorman 2, Dumb and Dumber To is a movie that’s been talked about for years but which most people doubted they’d ever see. However after a long wait it’s definitely coming, as previous set photos have attested.

Now though the film’s Twitter account has released the first official photo from the movie, while you can see above. They also included the message, ‘Lloyd and Harry are back for an all new ride! #DumbTo is out in theaters November 14th!’

The sequel picks up 20 years after the original and has dimwitted duo Harry and Lloyd searching for their long lost children in hopes of finding a matching kidney. The Farrelly brothers once more direct. 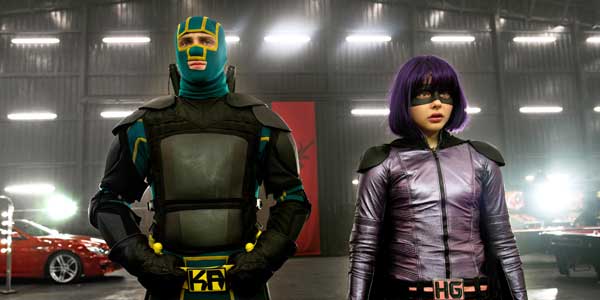 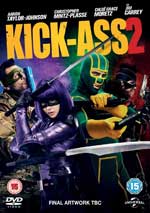 Picking up some time after the first movie, Dave Lizewski (Aaron Taylor-Johnson) has left his Kick-Ass superhero alter-ego behind and is now attending high school along Mindy McCready (Chloe Moretz), the former Hit Girl. While they may not be trying to fight the bad guys, Kick-Ass has inspired others to take up the costumed vigilante cause. END_OF_DOCUMENT_TOKEN_TO_BE_REPLACED

For a while Owen Wilson and Jim Carrey had been planning to team up for Loomis Fargo, but now the film has lost its title and one of the stars, as Carrey has been forced out due to scheduling problems. However his replacement is already being lined up as TheWrap says Zach Galifianakis is close to signing on.

Loosely based on a true story, the movie follows an armoured truck driver (Galifianakis) who is convinced to help participate in a $17 million robbery, but his partners are quick to turn on him once the job is done and leave him stranded in Mexico while they go off to live the high life. Then it’s time to settle the score.

Jared Hess is set to direct the action comedy, working from a script originated by Emily Spivey and more recently re-written by Chris Bowman and Hubbel Palmer. Hopefully it’ll also get a new title soon.

Filming on Dumb and Dumber To is finally underway, but the cast is still coming together with the news that Rob Riggle has joined the movie, according to Variety. There are also reports that Jennifer Lawrence has shot a secret cameo.

Riggle taking on a dual role, portraying handyman Travis and his unstable twin brother Captain Lippencott. Jim Carrey and Jeff Daniels reprise their roles as Lloyd Christmas and Harry Dunne from 1994’s Dumb and Dumber, who hit the road once again to find Harry’s long-lost daughter, who is in need of a kidney transplant.

It isn’t certain who Lawrence will be or how big her role will be. There’s always a chance she could be the sick daughter.

Pretty much since the day Dumb & Dumber hit it big in 1994 there’s been talk about a sequel, but while Jim Carrey, Jeff Daniels and the Farrelly Brothers talked about it over the years, it always seemed like something that would only ever happen in theory.

Even in the last couple of years as talk became more serious, many thought it wouldn’t happen, especially when New Line backed out. However now it’s becoming a reality and to prove it Jim Carrey, Jeff Daniels and the official Twitter account, DumbTo, have tweeted the first pictures from the set, showing us Harry & Lloyd are really coming back.

The sequel picks up 20 years after the original and has the dimwitted duo searching for their long lost children in hopes of finding a matching kidney. It’ll be out next year.

Dumb & Dumber To is one of those ‘I’ll believe it when I see it’ movies, as it’s been talked about for so long it’s difficult to believe it’s actually going to happen. However it’s survived being dropped by New Line (it’ll now be funded independently, with Universal distributing), and a lawsuit from one of the producers of the original movie, and now it’s started casting people to join Jeff Daniels and Jim Carrey.

Variety reports that Kathleen Turner is in talks to join the movie, but unfortunately there are details of who Turner will be playing. But then, little is known about the movie, other than that Carrey and Daniels are returning to play Harry and Lloyd in the follow-up to the 1994 comedy.

The Farrelly brothers are also back to direct, with plans to start shooting fairly so it can be released next year, exactly 20 years after the first film.

I think it’s safe to say that they haven’t decided to sanitise Kick-Ass 2 to get a lower rating, as this new extended red-band trailer – released to coincide with the film’s appearance at Comic-Con – is certainly keen to show that the language and violence is very much intact. And it’s also looking a whole lot of fun.

It also gives us out best look yet at Jim Carrey’s Colonel Stars & Stripes, as well as Christoph Mintz-Plasse’s return as the rather S&M The Motherf**ka.

Here’s the synopsis: ‘Kick-Ass, Hit Girl and Red Mist return for the follow-up to 2010’s irreverent global hit: Kick-Ass 2.  After Kick-Ass’ (Aaron Taylor-Johnson) insane bravery inspires a new wave of self-made masked crusaders, led by the badass Colonel Stars and Stripes (Jim Carrey), our hero joins them on patrol.  When these amateur superheroes are hunted down by Red Mist (Christopher Mintz-Plasse)—reborn as The Mother F%&*^r—only the blade-wielding Hit Girl (Chloë Grace Moretz) can prevent their annihilation.

‘When we last saw junior assassin Hit Girl and young vigilante Kick-Ass, they were trying to live as normal teenagers Mindy and Dave.  With graduation looming and uncertain what to do, Dave decides to start the world’s first superhero team with Mindy.  Unfortunately, when Mindy is busted for sneaking out as Hit Girl, she’s forced to retire—leaving her to navigate the terrifying world of high-school mean girls on her own.  With no one left to turn to, Dave joins forces with Justice Forever, run by a born-again ex-mobster named Colonel Stars and Stripes.

‘Just as they start to make a real difference on the streets,  the world’s first super villain, The Mother F%&*^r, assembles his own evil league and puts a plan in motion to make Kick-Ass and Hit Girl pay for what they did to his dad.  But there’s only one problem with his scheme: If you mess with one member of Justice Forever, you mess with them all.’