After the Oscar-nominated success of Paranorman, animation studio Laika has revealed their third movie, The Boxtrolls, based in Alan Snow‘s book Here Be Monsters! Open Season co-director Anthony Stacchi and Coraline/ParaNorman story artist Graham Annable are set to direct the movie, which already has an impressive voice cast attached.

Here’s a rundown of the plot: ‘The Boxtrolls is a comedic fable that unfolds in Cheesebridge, a posh Victorian-era town obsessed with wealth, class, and the stinkiest of fine cheeses. Beneath its charming cobblestone streets dwell the Boxtrolls, foul monsters who crawl out of the sewers at night and steal what the townspeople hold most dear: their children and their cheeses. At least, that’s the legend residents have always believed.

‘In truth, the Boxtrolls are an underground cavern-dwelling community of quirky and lovable oddballs who wear recycled cardboard boxes the way turtles wear their shells. The Boxtrolls have raised an orphaned human boy, Eggs (voiced by Mr. Hempstead-Wright), since infancy as one of their dumpster-diving and mechanical junk-collecting own. When the Boxtrolls are targeted by villainous pest exterminator Archibald Snatcher (Mr. Kingsley), who is bent on eradicating them as his ticket to Cheesebridge society, the kindhearted band of tinkerers must turn to their adopted charge and adventurous rich girl Winnie (Ms. Fanning) to bridge two worlds amidst the winds of change – and cheese.’

Deadline has posted some concept art from the film, which you can see below. 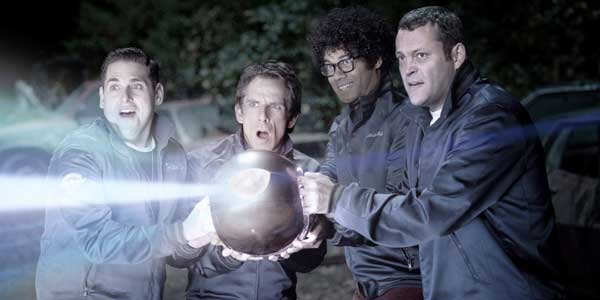 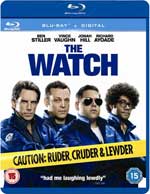 In one of the featurettes on The Watch Blu-ray, producer Shawn Levy says the key to the movie was the casting, and that’s kinda the problem, as they don’t seem to have spent a whole lot of time on anything else. The film lines up a potent quartet of comedy actors, and seems to assume their presence alone can make the movie work, even though the script spends most of the time meandering around a plot that’s pretty much join-the-dots. END_OF_DOCUMENT_TOKEN_TO_BE_REPLACED

The Watch looks like it could be fun, with Ben Stiller, Vince Vaughn, Jonah Hill and Richard Ayoade as members of a suburban neighborhood watch group that serves as a front for dads to get some male-bonding time away from their families. The group finds itself in over its head when it uncovers an alien plot to destroy the world. A new international trailer has now shown up, ahead of the film’s release on August 29th.

The first poster and promo for this summer’s action comedy, Neighborhood Watch, have arrived, and while they don’t tell us much about the plot, they do reveal that perhaps Ben Stiller, Vince Vaughn, Jonah Hill and Richard Ayoade are taking the whole idea of Neighborhood Watch way too seriously. The guy guys set up the group as an excuse to escape their humdrum lives one night a week. But when they accidentally discover that their town has become overrun with aliens posing as ordinary suburbanites, they have no choice but to save their neighborhood – and the world – from total extermination. The movie is due out August 22nd.

US magazine Entertainment Weekly is in the fortunate position to be big enough that it very often gets the very first images from movies to show off. Its latest issue has a trio of exclusive first looks – Hansel & Gretel: Witch Hunters, Wrath Of The Titans and Neighborhood Watch.

The pic above, via EW, is from Hansel & Gretel: Witch Hunters, which stars Jeremy Renner and Gemma Arterton as grown up versions of the fairy tale characters, who are now in the business of hunting witches. Arterton commented, “You see a series of flashbacks with their experience of killing that first witch, which is brilliant. I remember being on set for the final few days of that. The candy house, and the witches are really repulsive and quite frightening. The make-up is out of this world. It’s this bone-chilling scene. Very dark. The girl who plays my character is brilliant, with the horrified expression she has. This (movie) is about abandonment and being lost and parents leaving you. The heart of it is that these kids grow up to be bloodthirsty witch hunters. It’s a bit tongue in cheek, really. What would Hansel and Gretel be in 15 years time?”

Take a look below for the Neighborhood Watch and Wrath Of The Titans pics, which were scanned from Entertainment Weekly by The Playlist.

Neighborhood Watch stars Ben Stiller, Vince Vaughn, Richard Ayoade and Jonah Hill as guys who put together a home security group as an excuse to hang out and get away from their families. However they discover a nefarious plot to take over the world! The film’s due out August 22nd, 2012.

Sam Worthington is rocking a lovely bouffant look in the followup to Clash of The Titans. The Jonathan Liebesman directed movie is out March 20th, and sees Perseus heading into the underworld after Zeus is kidnapped.