Even before Sinister was released, writers Scott Derrickson and C. Robert Cargill were already talking about a sequel, however it’s only now that the film has been officially announced. Deadline says producer Jason Blum (Paranormal Activity, Insidious) is also back on-board, bringing us the movie through his Blumhouse Productions company.

Derrickson and C. Robert Cargill will once more write the screenplay, although Scott will not return as the director. As a result a search is on for a new filmmaker to tackle the follow-up. Derrickson can’t direct as he’s busy elsewhere, developing the video game adaptation Deus Ex: Human Revolution, with he will also co-write with C. Robert Cargill.

Sinister is a true crime author who moves into a house where a family was brutally murdered. He discovers that an evil presence lurks within his new abode, and that his family is in serious danger. The film sets itself up for a sequel by suggesting this is just one chapter in an ongoing sequence of paranormal murcer.

Sinister grossed more than $77 million worldwide from just a $3 million budget. Ethan Hawke is unlikely to return to star.

While each of the previous Paranormal Activity movies has opened stronger than the last, Paranormal Activity 4 broke that streak with a soft $30 million debut. It will still be an incredibly profitable film, as it only cost $5 million to make, but it’s certainly a dip from part 3’s $52.6 million.

However Paranount can console itself with the fact that elsewhere in the world the movie has opened stronger than the last film. That said, with dodgy reviews and apparently soft word of mouth, it may not hold up stunningly well in the rup up to Halloween.

Although it’s a rather made up record, Warner is trumpeting that Argo has had the best hold of any live action movie ever released outside the November and December holiday window, dropping just 15% from its debut. It added another $16.3 million, suggesting amazing word of mouth.

Other than PA4, the only other new movie to hit the top 10 was the Tyler Perry starrer Alex Cross, which opened to a disappointing $11.75 million. Despite a marketing campaign that tried to sell the film outside Perry’s core African American audience, trying to lure in James Patterson fans, 74% of the those buying tickets were black. It’s not a great start and is likely to nix plans that were already in motion for a sequel.

Taken 2 has topped the US box office for a second week running, taking another $22.5 million to take it total to $86 million after 10 days. While the holdover stayed top, Ben Affleck’s Argo was a strong second, outpacing many people’s expectations by taking $20 million to place second on the charts. It also got a very good reaction from audiences, suggesting it should have a good run at cinemas.

Sinister placed third with a good but not amazing $18 million. As it only cost $3 million to make, it’ll be very profitable, even if it’s now unlikely to reach true horror heights.

Here Comes The Boom did less well, marking a low point for Kevin James as a leading man with $12 million to place fifth. Although not a disaster, it’s less than Sony had hoped. Seven Psychopaths did even less well, taking just $4.2 million to place ninth. Although it was showing on fewer screens than many other releases, its per screen average still wasn’t great.

Take a look below for the US box office top 10 for the weekend of October 12th-14th.

There are a lot of bloggers who dream of writing a movie, but few who actually manage it, especially teaming up with the producer of Paranormal Activity and the director of The Exorcism Of Emily Rose. However that’s what’s C. Robert Cargill has done. After writing for the likes of AintItCool, Cargill got together with Scott Derrickson to write Sinister, which stars Ethan Hawke and hits cinemas today. You can read our review of the film here. We caught up with Cargill to find out a bit more. END_OF_DOCUMENT_TOKEN_TO_BE_REPLACED 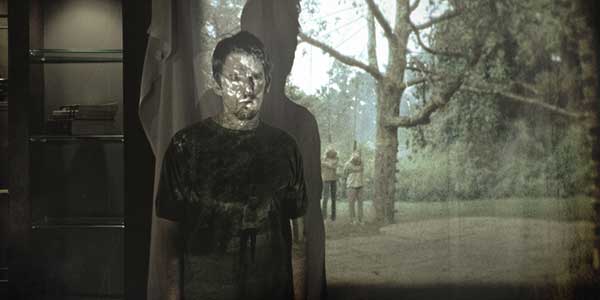 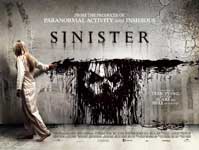 Ethan Hawke plays Ellison Oswalt, a writer of true-crime books who moves his family to a small town to investigate the murder of four members of a family, and the disappearance of a small girl, for which no perpetrator has ever been found. What he hasn’t told his wife and kids is that the house they’ve moved into is the one where the family were hung from a tree in the backyard. END_OF_DOCUMENT_TOKEN_TO_BE_REPLACED