The Purge films have proven far more successful than most people expected and now they want us to discover how it all began with, The First Purge. The trailer for the film has now arrived.

Here’s the synopsis: ‘Behind every tradition lies a revolution. Next Independence Day, witness the rise of our country’s 12 hours of annual lawlessness. Welcome to the movement that began as a simple experiment: The First Purge. To push the crime rate below one percent for the rest of the year, the New Founding Fathers of America (NFFA) test a sociological theory that vents aggression for one night in one isolated community. But when the violence of oppressors meets the rage of the marginalized, the contagion will explode from the trial-city borders and spread across the nation.’

The film hits cinemas in July. Take a look at the trailer below. END_OF_DOCUMENT_TOKEN_TO_BE_REPLACED

Synopsis: ‘A young Peter Parker/Spider-Man (Tom Holland), who made his sensational debut in Captain America: Civil War, begins to navigate his newfound identity as the web-slinging super hero in Spider-Man: Homecoming. Thrilled by his experience with the Avengers, Peter returns home, where he lives with his Aunt May (Marisa Tomei), under the watchful eye of his new mentor Tony Stark (Robert Downey, Jr.). Peter tries to fall back into his normal daily routine – distracted by thoughts of proving himself to be more than just your friendly neighborhood Spider-Man – but when the Vulture (Michael Keaton) emerges as a new villain, everything that Peter holds most important will be threatened.’

There’s a lot of excitement about the film, with many expecting it to cement Tom Holland’s reputation as a real star of the future. It’s also looking pretty cool from the new trailer and poster, which you can take a look at below.

The movie will be in cinemas on July 25th. END_OF_DOCUMENT_TOKEN_TO_BE_REPLACED

The whole idea of Spider-man joining Marvel’s superhero universe has certainly been intriguing. It was a success with Captain America: Civil War, but now Sony is returning with its own Spidey movie starring Tom Holland, Homecoming. However, they deal between Disney and Marvel means they’re still bridging studios with the film, as it will feature Robert Downey Jr.’s Tony Stark/Iron Man.

Here’s the synopsis: ‘A young Peter Parker/Spider-Man (Tom Holland), who made his sensational debut in Captain America: Civil War, begins to navigate his newfound identity as the web-slinging super hero in Spider-Man: Homecoming. Thrilled by his experience with the Avengers, Peter returns home, where he lives with his Aunt May (Marisa Tomei), under the watchful eye of his new mentor Tony Stark (Robert Downey, Jr.). Peter tries to fall back into his normal daily routine – distracted by thoughts of proving himself to be more than just your friendly neighbourhood Spider-Man – but when the Vulture (Michael Keaton) emerges as a new villain, everything that Peter holds most important will be threatened.’

The movie will be in cinemas this July. Enjoy the new trailer below. END_OF_DOCUMENT_TOKEN_TO_BE_REPLACED

It’s here – the first trailer for Spider-man: Homecoming. It has to be said it’s pretty cool, with some great action, a menacing Michael Keaton as the Vulture, and Robert Downey Jr. showing up as Tony Stark to give the young Peter Parker a bit of advice.

Here’s the synopsis: ‘A young Peter Parker/Spider-Man (Tom Holland), who made his sensational debut in Captain America: Civil War, begins to navigate his newfound identity as the web-slinging super hero in Spider-Man: Homecoming.  Thrilled by his experience with the Avengers, Peter returns home, where he lives with his Aunt May (Marisa Tomei), under the watchful eye of his new mentor Tony Stark (Robert Downey, Jr.). Peter tries to fall back into his normal daily routine – distracted by thoughts of proving himself to be more than just your friendly neighborhood Spider-Man – but when the Vulture (Michael Keaton) emerges as a new villain, everything that Peter holds most important will be threatened.’

Take a look at the new trailer below (we’ve included both the international and US versions). It’ll be in cinemas next July. END_OF_DOCUMENT_TOKEN_TO_BE_REPLACED

The Big Short certainly has an impressive cast – including Christian Bale, Ryan Gosling, Steve Carell, Melissa Leo, Brad Pitt, Marisa Tomei, Karen Gillan and Selena Gomez – all attracted by a major studio movie that takes on the causes of the financial crisis, and those who saw what was coming when no one else could.

They also all seem to have slightly odd hair, but perhaps financial type people like having hair that looks like it was stuck on their head.

Here’s the synopsis: ‘When four outsiders saw what the big banks, media and government refused to, the global collapse of the economy, they had an idea: The Big Short. Their bold investment leads them into the dark underbelly of modern banking where they must question everyone and everything. Based on the true story and best-selling book by Michael Lewis (The Blind Side, Moneyball), and directed by Adam Mckay (Anchorman, Step Brothers) The Big Short stars Christian Bale, Steve Carell, Ryan Gosling and Brad Pitt.’

An Oscar-qualifying Christmas release is planned for the US before in spreads to the rest of the world in early 2016. END_OF_DOCUMENT_TOKEN_TO_BE_REPLACED

Peter Parker/Spider-man is getting younger as he morphs from Andrew Garfield into the form of 18-year-old Tom Holland, and it appears his Aunt May may be getting a few years knocked off her too. While the character has traditionally looked like someone who could have been Peter grandmother, this time around she may be played by 50-year-old Marisa Tomei.

Variety reports the actress is in talks for the role, although as yet the studio behind the movie, Sony, has made no comment. It’s not clear how close she is to signing, but it appears an offer was made to her last week.

Jon Watts (Cop Car) was recently announced to direct the film and Sony is currently looking for a writer to help shape the stand-alone Spidey flick alongside him. The film is due for release July 28th, 2017.

That won’t be our first look at Holland as Spider-man, as he’s due to appear in Captain America: Civil War, although it’s believed this will be little more than a cameo. However Marvel will be fully involved in this do-over of the Spider-man universe, which leaves the door open for more cross-overs in the future. 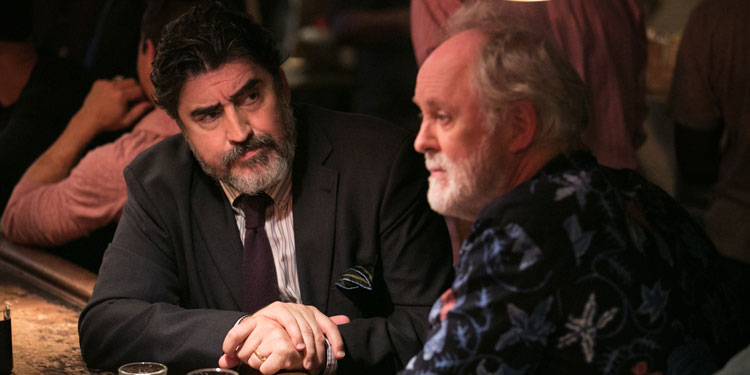 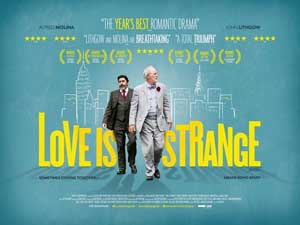 John Lithgow and Alfred Molina are the central couple, two hugely liked and popular men who decide to get married after being together for so long. The story opens with their marriage day, a happy occasion with lots of laughter, wine and song. This bliss doesn’t last for long. END_OF_DOCUMENT_TOKEN_TO_BE_REPLACED

In The Rewrite Hugh Grant is Keith Michaels, a man who several years ago won a Best Screenplay Oscar. However his last few films have flopped and he’s lost his way. He agrees to teach screenwriting at an East Coast college, where he intends to do as little work as possible. However the college has other ideas, forcing him to actually engage with his students.

Keith finds himself getting closer to a single mother in his class, Holly (Marisa Tomei), whose plain-spoken wisdom cuts through all of his Hollywood bull. Despite his initial disdain for the whole idea of teaching, Keith begins to find value in what he’s doing. END_OF_DOCUMENT_TOKEN_TO_BE_REPLACED

A few weeks ago it was revealed that Hugh Grant and Marc Lawrence have agreed to team up for a fourth time (Lawrence has never directed a movie that doesn’t feature Grant) for a new rom com. Now it appears Hugh has got some company, with The Wrap reporting that Marisa Tomei is in talks to join the film.

The movie starts out in 1998, and follows Ray Michaels (Grant) who is on top of the world – a witty, sexy, Englishman in Hollywood who had just won an Academy Award for Best Screenplay. 15 years later, he’s creatively washed up, divorced, and broke.

With no other options, he takes a job teaching screenwriting at a small college on the East Coast. Although the idea of teaching is less than thrilling, he hopes to make some easy money and enjoy the favours of impressionable young co-eds. What he doesn’t expect to find is romance with a single mom who’s gone back to school. It’s believed Tomei is up for the role of the mom.

It always good when Sam Rockwell signs up for a movie, and now he’s got a new one, with Screen Daily reporting that he, Brian Geraghty and Marisa Tomei are set to star in Why Now, which will be helmed by actors turned writer/directors Michael Godere and Ivan Martin.

Godere and Martin have also included roles for themselves in the flick, although there aren’t many details on the plot. Interestingly, it seems Rockwell, Geraghty and Tomei must have been very intrigued by the script, as they’re certainly not getting a big payday. The movie has a budget of only $500,000, so they the directors have certainly scared up a good cast for a movie with very little cash to splash.

The plan is to shoot next month in upstate New York.