Now that Teen Wolf has come to an end (and his movie career wasn’t exactly helped by the recent horror Truth or Dare), Tyler Posey has decided to head for the apocalypse. After playing recurring characters in Jane The Virgin and Scream: The Series, he’s getting a boyfriend in the upcoming TV series, Now Apocalypse.

Variety reports that the Steven Soderbergh produced show is ‘a surreal, coming-of-age comedy that follows Ulysses and his friends Carly, Ford and Severine, who are on various quests pursing love, sex and fame in Los Angeles. Between sexual and romantic dating app adventures, Ulysses grows increasingly troubled as foreboding premonitory dreams make him wonder if some kind of dark and monstrous conspiracy going on, or is he just smoking too much weed?

‘Posey will appear as Gabriel, described as an incredibly charismatic and mysterious guy that Ulysses matches with on a dating app. During their highly-anticipated first date, they can hardly contain themselves.’

Ulysses will be played by Avan Jogia, best known from Nickelodeon’s Victorious and for playing the title character in a mini-series about King Tut. It’s perhaps not too surprise that the show will have a queer lead character, as it was created by Gregg Araki, the filmmaker behind the likes of the LGBT-themed movies Mysterious Skin, Kaboom, and The Living End. The US TV network Starz has ordered a 10-episode first Season of the show, which is due to air later this year.

Steven Soderbergh came back from his self-imposed retirement last year with Logan Lucky. Now he’s lining up his next movie, and this time he’s decided that rather than expensive cameras, he was going to shoot the entire thing on an iPhone. He’s not the first to do it as other movies, most notably the award-winning Tangerine, have done it before, but the Ocean’s 11 helmer is certainly the highest profile director to go down that route.

‘A young woman leaves her hometown to escape a troubled past and begin a new job. But when she is involuntarily committed to a mental institution she is confronted by her greatest fear — but is it real or just her delusion? With seemingly no-one ready to believe her and the authorities unable or unwilling to help, she must confront her fears head on. With twisting perspectives and a shocking narrative, Unsane asks questions about our perception of reality, our survival instinct and the system that is supposed to take care of us.’

The movie hits UK cinemas on March 23rd. Take a look at the trailer below. END_OF_DOCUMENT_TOKEN_TO_BE_REPLACED 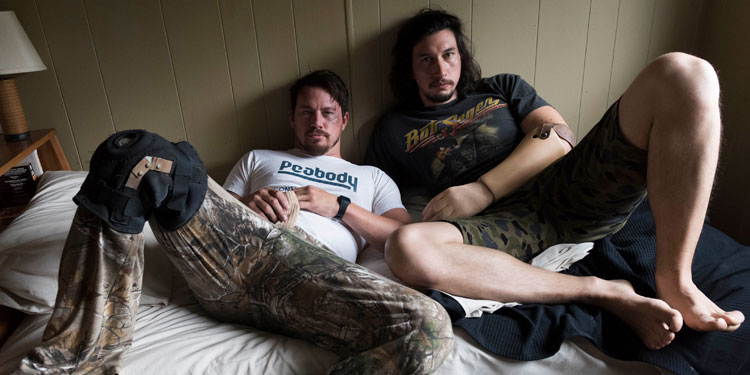 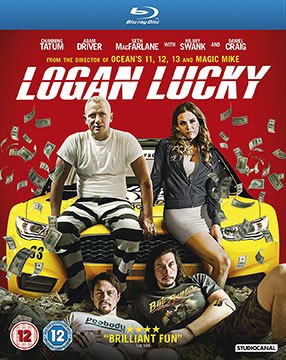 What appears to have brought him back wasn’t just the story and script, but that they managed to find a way to essentially cut out the usual mainstream film machine by pre-selling foreign distribution and TV/streaming rights and then releasing the movie in the US himself. END_OF_DOCUMENT_TOKEN_TO_BE_REPLACED

Here’s the synopsis: ‘Jimmy Logan (Channing Tatum) is from a blue-collar family from the hills of West Virginia, whose clan has been famous for its bad luck for nearly 90 years. After being fired from his job, and with his ex-wife (Katie Holmes) threatening to move out of State taking their daughter with her, Jimmy decides he has to do something to get his family’s life back on track. With a little help from his brother Clyde Logan (Adam Driver), his sister Mellie (Riley Keough) and an incarcerated explosive expert, the aptly named Joe Bang (Daniel Craig), he plans to steal $14 million from the Charlotte Motor Speedway on the busiest race day of the year.

Logan Lucky is out in the UK on August 25th. Take a look at the new trailer below. END_OF_DOCUMENT_TOKEN_TO_BE_REPLACED

Logan Lucky is out in the US in August. No UK date is currently set. Take a look at the trailer below. END_OF_DOCUMENT_TOKEN_TO_BE_REPLACED

For several years, Traffic, Magic Mike and Ocean’s 11 helmer Steven Soderbergh kept saying he was going to retire from directing, but never quite seemed to manage it. However, after Behind the Candelabra he suggested he really was done, before directing loads of episodes of TV’s The Knick.

Now it looks like he’s going cinematic again, as Variety reports he’s working on a movie surrounding the recently released Panama Papers. The movie will be based on Jake Bernsteins, upcoming book “The Secrecy World. Berstein was a senior reporter on the team that broke the Panama Papers story.

Secrecy World is ‘an account of the leak of 11 million documents from the Panamanian law firm Mossack Fonseca about dubious global financial transactions. The Panama Papers were leaked by International Consortium of Investigative Journalists and provided details of how the wealthy and powerful used the law firm to escape scrutiny.’

It’s no known when the movie might go into production.

Three years ago, Ocean’s 11 and Traffic helmer Steven Soderbergh announced he was retiring as a movie director, with his last theatrical movie being Side Effects, followed by the TV film, Behind The Candelabra. However, it appears he may have been lured out of his semi-retirement, with Variety reporting that he’s attached to helm a movie called Lucky Logan, which Channing Tatum is attached to star in.

To be honest it’s not particularly shocking news, as not only did Soderbergh keep delaying his initial retirement by making more movies, but he’s still been heavily involved in the industry as a producer and cinematographer, as well as direcing numerous episodes of the TV series The Knick. The new film would reunite Steven with his Magic Mike star (indeed Soderbergh was also a Producer and the Director Of Photography for the sequel, even though he didn’t direct).

There’s no info on the plot of Lucky Logan, with Variety just saying that its “a mystery, but sources say Soderbergh recently got his hands on the script and quickly fell in love with the premise”. However, before we cheer Soderbergh’s return to feature film directing, the director himself has suggested that’s not what happening, heading to Twitter to say, ‘That Variety story is wrong. What a shock.’

That doesn’t mean he isn’t involved in some capacity, or that it’s not other aspects of the story he’s disputing, but it’s a bit early to say he’s definitely going to be in the director’s chair.

Those are the words of Steven Soderbergh as he announced the start of shooting on Magic Mike XXL with a tweeted picture of the movie’s clapperboard, which you can see below.

You might be wondering what Soderbergh is doing there, seeing as he’s ‘retired’ from directing and has passed the helming reins for the male stripper sequel to his longtime Assistant Director, Gregory Jacobs. Unusually Steven’s not just there for moral support, but as one of the staff. The cinematographer’s name on the clapperboard, Peter Andrews, is a pseudonym for Soderbergh, and he will also edit the movie.

But while the shoot has started, there are still plenty of unanswered questions. For a start we don’t know much about the plot, other than what Channing Tatum told MTV a few months ago when he said, “This one will be a road trip movie. Without giving a lot away, we don’t wanna make it a really serious, slice-of-life movie. We want to have reality in it, but we don’t want to make it some dark drama. There was some darkness in the last one that I think surprised people and shocked people. This one, we want there to be a lot of conflict and a lot of struggle, but we also want there to be a shit-ton of fun. A shit-ton of just ridiculous stuff that you would never see in a movie.”

Tatum and Joe Manganiello are both definitely back, and while it’s previously been suggested Alex Pettyfer, Matt Bomer and Matthew McConaughey were also likely to reprise their roles in one way or another, they’ve still not been officially announced.

Channing also co-wrote the movie alongside collaborator Reid Carolin. The film’s due out July 2015. END_OF_DOCUMENT_TOKEN_TO_BE_REPLACED

Shortly after Magic Mike became a surprise hit, Channing Tatum started talking about making a sequel, and at one point it was even suggested it could have been his directorial debut. However its only now that the movie is ready to move forward, and Tatum won’t be at the helm.

A couple of days ago Joe Manganiello said they we planning to shoot the follow-up this autumn and that more info would be announced very soon. Well now it has, as ThePlaylist reports that Steven Soderbergh’s longtime assistant director, Gregory Jacobs, will direct the movie, and it’ll be getting the slightly risqué title Magic Mike XXL.

Channing Tatum is co-writing the movie alongside Reid Carolin, and will return to play the title character. Soderbergh, who directed the first film, will executive produce.

While it’s almost certain Joe Manganiello will once again co-star, it’s not known who amongst Matthew McConaughey, Alex Pettyfer, Joe Manganiello, Matt Bomer and Olivia Munn might also be back, although it’s believed all are interested in returning.

Hollywood studios refused to pay for Behind The Candelabra as despite the presence of Michael Douglas, Matt Damon, director Steven Soderbergh (Traffic, Ocean’s 11) and having a relatively low-budget, they thought it was too gay to become a success. They’re probably kicking themselves now as HBO stepped up to the pay for it and had a huge hit with it on US TV, while distributors in other countries took it to cinemas and saw healthy box office. END_OF_DOCUMENT_TOKEN_TO_BE_REPLACED