Set before Puss met his ogrish pals, the film sees the well-shod feline as an outlaw who discovers the dastardly Jack & Jill have the magic beans he’s been looking for most of his life. When he tries to steal them, he’s interrupted by another cat who on the outside of the law, Kitty Softpaws, who turns out to be allied to Puss’ old pal Humpty Dumpty. However Puss and Humpty have long been estranged, as despite growing up together in an orphanage, Puss blames Humpty for making him an outlaw when he got him involved in a robbery he knew nothing about. END_OF_DOCUMENT_TOKEN_TO_BE_REPLACED 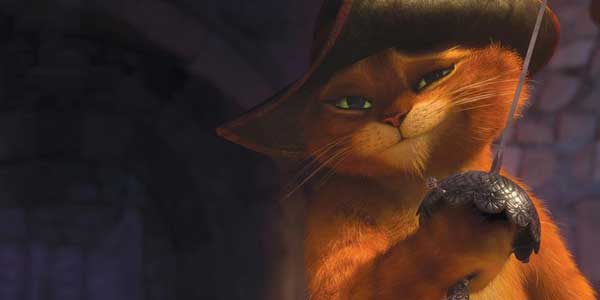 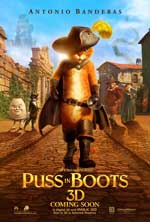 It’s just plain wrong. It’s bound to cause children to start asking awkward questions about why Puss is wearing boots. It should be a parent’s decision how and when to broach such thorny subjects, not forced upon them by the all-powerful pro-shoes-for-cats agenda. Indeed it’s gotten to the point where right thinking people are afraid to stand up for what’s right and openly say Puss shouldn’t wear boots! END_OF_DOCUMENT_TOKEN_TO_BE_REPLACED

It was quite an unusual week at the US box office, as no new movies at all made it into the top 10, with older film merely shifting around a little. Things remained exactly the same at the top though, with Twilight: Breaking Dawn – Part 1 in the number 1 slot, despite dropping 60% from last weekend to $16.9 million, while The Muppets stayed at number 2 with an $11.2 million weekend gross.

The only notable new entry was outside the top 10. Many eyes were on Shame and whether the highly acclaimed movie could find box office success, despite getting an adults-only NC-17 rating, which many view as commercial suicide in the US (most companies would prefer to release a movie with no rating that having an NC-17 rating). While it only opened on 10 screens, it took $361,000, giving it by far the highest per-screen average on the chart. All eyes will now be on whether it can continue to do well as it expands onto more screens in the next few weeks.

Take a look below for the US box office top 10 for the weekend of December 2nd-4th.

It may already be out in the US, but Puss In Boots doesn’t reach UK cinemas until December 9th. Before than an extended, five-minute clip from the film has popped up over at MSN, and you can watch it embedded here. Here’s the synopsis: ‘Long before he even met Shrek, the notorious fighter, lover and outlaw Puss in Boots becomes a hero when he sets off on an adventure with the tough and street smart Kitty Softpaws and the mastermind Humpty Dumpty to save his town. This is the true story of The Cat, The Myth, The Legend…The Boots.’ The films had good reviews, so get a feel for it with this lengthy clip.

The question this weekend wasn’t whether Twilight: Breaking Dawn would have a good opening, it was just how big it would be. That question has now been answered with the latest in the series taking $139 million in its first three days in the US, and $283.5 million around the world. It’s the fifth biggest North American opening in history, but didn’t quite take the franchise record, which is still held by New Moon’s $142.8 million. It also scored the third biggest opening day gross ever, after the final Harry Potter and New Moon, taking $72 million in America on Friday.

The weekend’s other big opener didn’t have quite as much to cheer about, as Happy Feet Two landed with a rather tepid $22 million, about half what the first movie took when it opened. Warner knew they may face some competition for young females fromTwilight, but perhaps underestimated quite how much, as they’d predicted a $30 million plus opening.

However one other movie did outperform expectations – indeed going by per-theatre average, it outdid Breaking Dawn – and that’s George Clooney’s new movie The Descendants. The Hawaii set movie, directed by Sideways helmer Alexander Payne, took $1.2 million from only 27 screens. That’s a very impressive $42,000 per theatre, suggesting the film will do very well as it explands over the next few weeks.

Despite some rather stinging reviews, Immortals has gotten off to a pretty good start at the US box office with $32 million dollars. That may not be as much as the likes of 300 and Clash of The Titans, but still marks the biggest opening for a film not released by one of the six major studios since The Expendables.

Adam Sandler’s Jack And Jill had to settle for second spot with $26 million, slightly lower than most of Sandler’s movies, but still ahead of Funny People. The film film should play well over the next couple of weeks though, with those looking for a laugh over Thanksgiving.

The only other new entry was J. Edgar, which despite the hype and star power of Leo DiCaprio made only $11.4 million. That’s not an amazing start, but is actually slightly ahead of Clint Eastwood’s last movie, Hereafter. Although with rather mixed reviews it may struggle in the weeks ahead.

Dreamworks Animation executives will be smiling today, as after worries last week that Puss In Boots opening weekend wasn’t up to the usual numbers the company makes, in its second weekend it hasn’t just stayed on top of the US box office chart, but it’s made almost exactly the same money it did in its first few days in cinemas – a rare feat. The film added $33.0 million to its tally, which suggests it’s going to have legs in the run up to Thanksgiving.

While most analysts had expected it to be a battle between Puss In Boots and Tower Heist for the top spot, in the end the animated movie was the cleart winner, with the Ben Stiller action adventure coming in softer than expected at $25 million. It’s not a terrible start but certainly less than the studio had hoped for.

The only other new entry was A Very Harold & Kumar 3D Christmas, which took $13 million, about on par with the previous entry in the franchise. You would have thought the film might have done better if they’d waited until a little closer to the festive season to release it, but with the schedules getting packed, they must have thought early November made sense.

Take a look below for the US box office top 10 for the weekend of November 4th-6th.

CHECK OUT THESE RELATED ARCHIVES:
FILMS: Puss In Boots, Paranormal Activity 3, In Time, Footloose, The Rum Diary, The Ides Of March, Moneyball

As expected, Puss In Boots shot to the top of the US box office, taking a Halloween record of $34.0 million. That may be the best the scary holiday has ever managed, but it’s not particularly stunning for Dreamworks Animation, especially as this is a spin-off from the Shrek franchise.

It’s significantly less that any of the Shrek movies (even the first in that franchise started with a $40 million+ weekend). Likewise, more recent efforts like How To Train Your Dragon and Kung Fu Panda 2 have also started well over $40 million, so this is likely to be seen as a bit of a dispappointment, especially considering it had pretty strong reviews. Dreamworks Animation will be hoping that that the film has legs over the coming weeks and will stay in cinemas at least long enough to get a boost over the forthcoming Thanksgiving holiday.

There were two other entries in the top 10, with the Justin Timberlake sci-fi thriller In Time coming in at number three with $12.0 million and Johnny Depp’s The Rum Diary in fifth spot with $5.01 million. While not a great start for In Time, it wasn’t a particularly expensive movie to make, so the makers probably won’t be crying too much. However the presence of Depp alone should have dragged more people to The Rum Diary, but probably due to the fact the it’s been difficult to tell from the marketing exactly what sort of movie it is, seems to have turned people off.

Take a look below for the US box office top 10 for the weekend of October 28th-30th.

CHECK OUT THESE RELATED ARCHIVES:
FILMS: Puss In Boots, Paranormal Activity 3, In Time, Footloose, The Run Diary, The Three Musketeers, The Ides Of March, Moneyball, Courageous