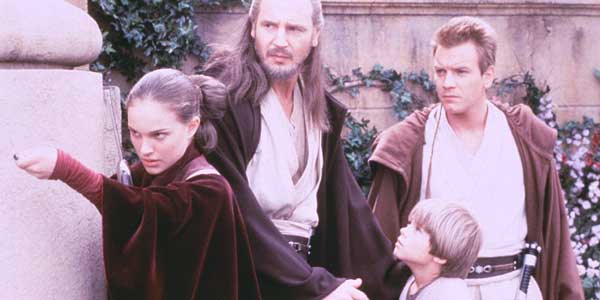 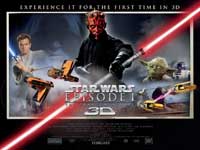 Watching the current seven-year-olds having their picture taken with Storm Troopers in the foyer, a cute young bear asked if I’d take one for him and having obliged, he returned the favour saying that “we bearded geek types should stick together” –  I should have heard the alarm bells ringing and run to the barbers but thinking I’d pulled END_OF_DOCUMENT_TOKEN_TO_BE_REPLACED

Ever since the 1970s, Star Wars has been producing great posters and it’s continuing that run for the upcoming 3D release of Star Wars: Episode I – The Phantom Menace. Indeed, the posters are better than the film (although perhaps a miracle will occur and in 3D it’ll turn out it’s a masterpiece). The film’s due out February 9th, and if it does well, we’ll be getting the other movies in 3D each year until Return Of The Jedi arrives in six years time.

This one is likely to be making an Oscar run in 2014, but the first trailer is here nevertheless, despite not being released until next September. Based on the bestselling novel, a visionary sheik (Amr Waked) has a big dream – to bring salmon fishing to the desert. Willing to spare no expense, he instructs his representative (Emily Blunt) to turn his dream into reality, an extraordinary feat that will require the involvement of Britain’s leading fisheries expert (Ewan McGregor), who happens to think the project both absurd and unachievable. That is, until the Prime Minister’s overzealous press secretary (Kristin Scott Thomas) latches on for its potential as a ‘good will’ story. Now, this unlikely team will put it all on the line and embark on an upstream journey of faith and fish to prove the impossible, possible. Lasse Halstrom (Chocolat) directs.

If there’s one aspect of being gay that’s been almost completely and totally ignored, it’s being older and gay, especially those who only started living openly in their twilight years. However one movie has spilled a little light in that direction, Beginners, and it’s starting to pick up a bit of a head of steam in the early awards ceremonies.

A couple of days ago it won Best Film (shared with Tree Of Life) and Best Ensemble at the Gotham Independent Awards, and now the National Board Of Review has handed veteran actor Christopher Plummer Best Supporting Actor for Beginners. In the film he plays an man who only comes out as gay after the death of his wife, around the same time he’s diagnosed with terminal cancer.

Plummer’s powerful and moving performance is now emerging as a frontrunner for the Best Supporting Actor Oscar, although there is a long way to go before that gong is handed out.

Beginners was also included in the National Board Of Review’s list of the Top 10 Independent films.

He’s made guest appearances on the likes of ER, but now Ewan McGregor is set to take on his first regular TV show role, as he’s joined the cast of HBO’s upcoming drama The Corrections, according to EW, based on the acclaimed novel of the same name by Jonathan Franzen.

The show will trace the lives of a Midwestern couple and their three adult children. Ewan McGregor will play the middle child, a Marxist academic who loses his tenure position after indulging in an affair with a student.

Noah Baumbach wrote the pilot with novelist Jonathan Franzen, and he is set to direct it as well, and will also produce the show. It was also recently revealed that HBO wants Anthony Hopkins for the series, but he decline. However with Chris Cooper and Dianne Wiest already onboard, it’s gonna be one hell of a cast even without Hopkins around. HBO is expected to debut The Corrections sometime in 2013.

It took quite a long time for I Love You Phillip Morris to make it to UK cinemas, partly because it’s a bit of a tough sell. It’s a film that moves from broad comedy to deeply felt drama, doesn’t shy away from the gay side of its story, and makes a hero out of a man who in most cases would be seen as the bad guy. However despite all these difficulties, the movie succeeds admirably. END_OF_DOCUMENT_TOKEN_TO_BE_REPLACED