A couple of weeks ago we had a trailer for Dirty Grandpa, but now the red band version is here to let us know that Robert De Niro is going to swear a lot in the finished movie, and that Zac Efron’s CGI undies from the first promo won’t be around in the final article.

Here’s the synopsis: ‘Jason Kelly [Zac Efron] is one week away from marrying his boss’s uber-controlling daughter, putting him on the fast track for a partnership at the law firm. However, when the straight-laced Jason is tricked into driving his foul-mouthed grandfather, Dick [Robert De Niro], to Daytona for spring break, his pending nuptials are suddenly in jeopardy.

‘Between riotous frat parties, bar fights, and an epic night of karaoke, Dick is on a quest to live his life to the fullest and bring Jason along for the ride. Ultimately, on the wildest journey of their lives, “dirty” Grandpa and his uptight grandson discover they can learn from one another and form the bond they never had.’

The movie will be in UK cinemas on January 22nd.

END_OF_DOCUMENT_TOKEN_TO_BE_REPLACED

Robert De Niro is back in comedy territory, but this time he’s got a very good looking grandson, as Zac Efron co-stars in Dirty Grandpa.

Efron plays a young man who’s about to get married, but who following the death of his grandmother is tricked into driving his granddad (De Niro), a perverted former Army general, to Florida for spring break. It’s cross-generation odd couple time, as Efron’s character is uptight while De Niro likes to have fun and party.

I think you can probably already tell what direction the film is taking.

The first trailer has arrived, which actually tones down the movie a little, including adding CG underwear onto Efron at one point (previous set photos have shown he was really wearing skin-coloured ‘nude’ underpants so he should be more naked in the movie). END_OF_DOCUMENT_TOKEN_TO_BE_REPLACED

Juno and Young Adult screenwriter Diablo Cody is turning director with Paradise, which is due to hit cinemas later this year. Now the first trailer for the movie has arrived.

Previously titled Lamb Of God, the comedy is about a young conservative religious woman (Julianne hough) who loses her faith after a plane crash. She decides to go to Las Vegas to live the life of a sinner – although what she classes as sin and what most people do are very different – and on her journey finds her way back to her faith. Cody comments that, “She is so naive that some of the shocking things she does we all would do on a Friday night.”

It’ll be out in the US in October, but there’s no UK release currently set. END_OF_DOCUMENT_TOKEN_TO_BE_REPLACED

Diablo Cody made a big splash with her Oscar winning screenplay for Juno, however she hasn’t really been able to capitalise on that with the likes of Jennifer’s Body and Young Adult. Now she’s turning director for Paradise, and the first images have emerged via USA Today.

Previously titled Lamb Of God, the comedy is about a young conservative religious woman (Julianne hough) who loses her faith after a plane crash. She decides to go to Las Vegas to live the life of a sinner and on her journey finds her way back to her faith. Cody comments that, “She is so naive that some of the shocking things she does we all would do on a Friday night.”

Diablo says, “If you have ever been through something incredibly difficult such as [Lamb’s injury], you know it’s hard to stay positive and not surrender to cynicism completely,” she said. “I wanted to make a non-cynical movie that would inspire positivity.”

An October US release date is already set, but there’s no UK release currently set. 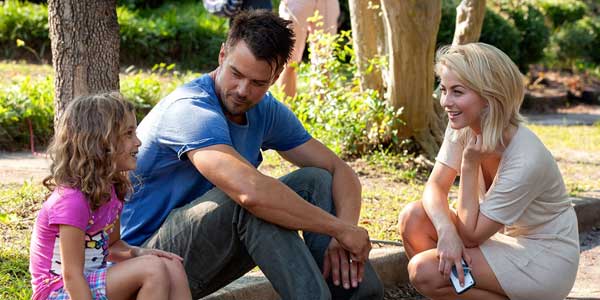 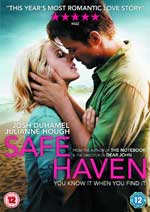 Despite her best efforts to keep people away, she starts to develop a connection with a local widower, Alex (Josh Duhamel) and his kids, as well as her new neighbour, Jo (Cobie Smulders). As she falls deeper for Alex, Katie begins to think maybe she’s found a future. However with a nationwide manhunt out saying she’s wanted for murder and a policeman determined to find her no matter where she is, the secrets of her past inevitably begin to emerge. END_OF_DOCUMENT_TOKEN_TO_BE_REPLACED

If you’re making an adaptation of a Nicholas Sparks novel it is compulsory that at some point a hunky young guy will get his shirt off – and if you want to sell the movie, you’ll probably release a few pics from that scene to publicise the movie.

That’s what’s happened with the upcoming Safe Haven, with a new pic of Transformers star Josh Duhamel frolicking in the surf with Julianne Hough.

Here’s the synopsis: ‘An affirming and suspenseful story about a young woman’s struggle to love again, Safe Haven is based on the novel from Nicholas Sparks, the best-selling author behind the hit films The Notebook and Dear John.

‘When a mysterious young woman arrives in a small North Carolina town, her reluctance to join the tight knit community raises questions about her past. Slowly, she begins putting down roots, and gains the courage to start a relationship with Alex, a widowed store owner with two young children.

‘But dark secrets intrude on her new life with such terror that she is forced to rediscover the meaning of sacrifice and rely on the power of love in this deeply moving romantic thriller.’

Hollywood simply can’t get enough of Nicholas Sparks. After the success of The Notebook we’ve had Nights In Rodanthe, Dear John, The Last Song, The Lucky One and now Safe Haven. The film is due out early next year, and now the trailer has arrived. Here’s the synopsis: ‘When a mysterious young woman named Katie (Julianne House) appears in the small North Carolina town of Southport, her sudden arrival raises questions about her past. Beautiful yet self-effacing, Katie seems determined to avoid forming personal ties until a series of events draws her into two reluctant relationships: one with Alex (Josh Duhamel), a widowed store owner with a kind heart and two young children; and another with her plainspoken single neighbor, Jo (Sobie Smulder). Despite her reservations, Katie slowly begins to let down her guard, putting down roots in the close-knit community and becoming increasingly attached to Alex and his family. But even as Katie begins to fall in love, she struggles with the dark secret that still haunts and terrifies her . . . a past that set her on a fearful, shattering journey across the country, to the sheltered oasis of Southport.’ Lasse Hallstrom directs, who also helmed Dear John.

Filled with great songs of the classic rock era – which has no doubt led it be being one of the last decade’s most popular musicals – the film makes you want to dance around and sing for the whole duration of the film. Although the music in the film is great, credit has to be given for the themes, of which several run through the film, with a sweet young love story evolving whilst the upside and downside of fame counterbalance each other in the background. Another theme that the film touches on is the clear mockery of the right wing with their wholesome image hiding a few dirty secrets. END_OF_DOCUMENT_TOKEN_TO_BE_REPLACED

Julianne Hough may not have broken out with either Footloose of Rock Of Ages, however Hollywood hasn’t given up on her, as Variety reports that she’s in talks for screenwriter Diablo Cody’s latest project, Time and a Half, directed by Ol Parker.

The story is about a college graduate (Hough) who is forced to take a temporary job at a trophy store to make ends meet. She soon runs into her sister’s high school boyfriend at the shop, with whom she had a one-night stand with ages ago.

This will be Julianne Hough’s second turn at teaming up with Diablo Cody, as she recently wrapped production on the Untitled Diablo Cody Project, which serves as the writer’s directorial debut. The producers are currently looking for the right actress to portray the sister. The project won’t move forward until their ideal actress is found, with producers hoping to start production next year.

CHECK OUT THESE RELATED ARCHIVES:
ACTORS: Julianne Hough  FILMS: Time And A Half

The plot (which to be honest there isn’t a huge amount of) follows Sherrie, who arrives in LA from Oklahoma full of dreams of making it big in the City of Angels. She’s barely off the bus when she bumps into Drew (Diego Boneta), who gets her a job at the famed club, The Bourbon Room. Soon Sherrie and Drew are falling in love, but as the big time beckons for Drew, the course of true love won’t run smooth. END_OF_DOCUMENT_TOKEN_TO_BE_REPLACED