Synopsis: ‘In the hip Brooklyn neighborhood of Red Hook, single dad and record store owner Frank (Nick Offerman) is preparing to send his hard-working daughter Sam (Kiersey Clemons) off to college, while being forced to close his vintage shop. Hoping to stay connected through their shared musical passions, Frank urges Sam to turn their weekly “jam sesh” into a father-daughter live act.

‘After their first song becomes an Internet breakout, the two embark on a journey of love, growing up and musical discovery.’

Ted Danson, Sasha Lane, Blythe Danner, and Toni Collette also star in the movie. The film will be in US cinemas on June 8th. It’s not known when we’ll see it in the UK. END_OF_DOCUMENT_TOKEN_TO_BE_REPLACED

There are a lot of people who love Nick Offerman from Parks & Recreation, but he’s never gotten to be the lead in a movie. Now though he’s taking centre stage and showing off his musical skills at the same time, as he’s set to headline Hearts Beat Loud.

The movie ‘centers on a father (Offerman) and daughter (Clemons) who form an unlikely songwriting duo in the last summer before she leaves for college. Hearts Beat Loud will feature four original songs and a score by award-winning composer-songwriter Keegan DeWitt.’

We’re also being promised that both Offerman and Clemons will sing in the movie.

Haley comments, “I wrote the film with Nick Offerman in mind after my experience working with him on The Hero. He is one of my favorite actors, and I’m very excited to be putting him at the center of this film.” 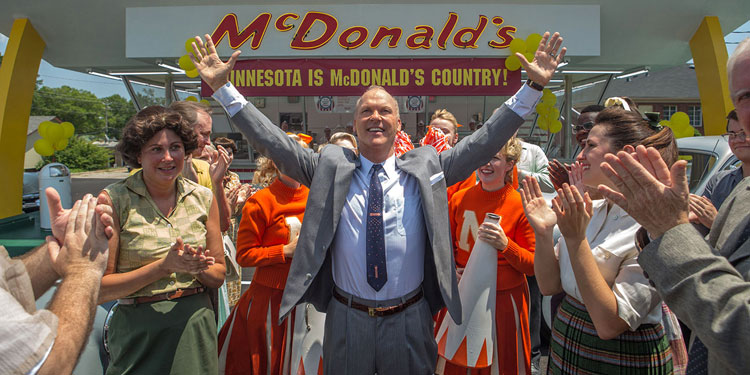 The McDonald brother, Dick and Mac (Nick Offerman and John Carroll Lynch) have completely reinvented the concept of the diner-type restaurant. From getting people to come to the window to order and serving them food in waxed paper, to a carefully designed system to be able to complete an order in seconds, Ray has never seen anything like it. END_OF_DOCUMENT_TOKEN_TO_BE_REPLACED

I think it’s fair to say, that if most gay gys ever get to do anything homoerotic with Chris Pratt, they’s want everyone to know about it. Well, it turns out that may be true of straight dudes too.

Nick Offerman has written a new book, and during an appearance on Conan, he was keen to point out that Good Clean Fun, includes a homoerotic comic where he gets a little personal with his former Parks & Recreation co-star, Chris Pratt. Although things don’t get too explicit, it looks like there’s plenty of subtext going on not too far under the surface.

You can take a look at Nick talking about it, as well as his Tinkle Box, below. END_OF_DOCUMENT_TOKEN_TO_BE_REPLACED

After years and years in development (it was originally planned as a reunion between Robert Redford and Paul Newman) it’s been announced that A Walk in the Woods has finally started shooting.

Along with that comes news of a few casting additions, including Nick Offerman, Kristen Schaal and Emma Thompson, who join the previously cast Redford and Nick Nolte.

The film is based on Bill Bryson’s best-selling memoir, which follows him (Redford) as he decides to hike the 2000-mile Appalachian Trail. Not wanting to go alone, he almost accidentally teams up with his long estranged high school buddy (Nolte) – a man who’s barely walked anywhere in his life. Along the way, the duo face off with each other, nature and an eccentric assortment of characters.

Ken Kwapis (He’s Just Not That Into You) is directing. He commented, “Bryson’s book is the ne plus ultra of travel memoirs. It’s also laugh-out-loud funny, and what excites me is giving two legendary dramatic actors the chance to flex their comedic muscles.”

Many people may be wondering whether a film filled with little yellow Lego people can work. Well, on the evidence of this new trailer, it could be a lot of fun. It also shows off the various franchises that will show up, including DC superheroes, NBA basketball teams, Lord Of The Rings and Ninja Turtles.

Here’s the synopsis: ‘The LEGO Movie follows Emmet, an ordinary, rules-following, perfectly average LEGO minifigure who is mistakenly identified as the most extraordinary person and the key to saving the world. Emmet (Chris Pratt) is drafted into a fellowship of strangers on an epic quest to stop an evil tyrant, a journey for which he is hopelessly and hilariously underprepared.

The Lego Movie may not arrive in cinemas until next year, but you can understand why they want to release a trailer nice and early, as a lot of people will be wondering whether a film filled with little yellow Lego people can work. Well, on the evidence of this, it could be a lot of fun, and it all shows off the various franchises that will show up, including DC superheroes, NBA basketball teams and Ninja Turtles.

Here’s the synopsis: ‘The LEGO Movie follows Emmet, an ordinary, rules-following, perfectly average LEGO minifigure who is mistakenly identified as the most extraordinary person and the key to saving the world. Emmet (Chris Pratt) is drafted into a fellowship of strangers on an epic quest to stop an evil tyrant, a journey for which he is hopelessly and hilariously underprepared.

If you’re hoping to find out what Somebody Up There Likes Me is about from this NSFW promo, you’re out of luck. However it does tell us that Parks And Recreation’s Adam Scott is apparently a dick, while all you need for an independent film is pussy and weed. It’s very entertaining, so take a look. Bizarrely though, despite being in the promo, neither Adam Scott or Alison Brie is in the actual movie.

Rob Byington’s film is ‘A comedy about a man, his best friend, and the woman they both adore watching their lives fly by.’ It stars Nick Offerman, Keith Poulson, Jess Weixler and Megan Mullally amongst others.

It’s in US cinemas now, although no UK date is set yet.

CHECK OUT THESE RELATED ARCHIVES:
ACTORS: Adam Scott, Nick Offerman, Megan Mullally, Alison Brie  FILMS: Somebody Up There Likes Me

The planned CGI LEGO movie is certainly pulling a great cast together, with the news that Will Ferrell, Liam Neeson, Alison Brie, and Nick Offerman have all signed up to voice roles in the film, according to Variety.

Will Arnett, Channing Tatum, Chris Pratt, Morgan Freeman, and Elizabeth Banks also star, with Arnett and Tatum particularly interesting, as they’ll be Superman and Batman, marking the first time the characters have appeared on screen together. The story is about Emmett (Pratt), a seemingly average Lego figure who is mistaken for a powerful man who can help save the universe. He joins a group determined to stop the evil President Business (Ferrell). Liam Neeson will play the villain’s right hand man, Bad Cop, with Alison Brie portraying a member of Emmett’s group. Nick Offerman will play a surly pirate, hell-bent on getting revenge on President Business.

And with a villain called President Business, we can already sense right wing nutjobs preparing to froth at the mouth about how this is trying to indoctrinate kids into hating capitalism.

Phil Lord and Chris Miller (21 Jump Street) are directing from a screenplay they co-wrote, based on an original story by Dan Hagerman and Kevin Hagerman. A release date of February 28th, 2014 is already set.

It’s very bizarre, but Will Ferrell is going Spanish for Casa Di Mi Padre (House Of My Father), and now a very bried new teaser for the movie has been released, asking ‘Who is Armando Alvarez?’ In the movie, Armando Alvarez (Will Ferrell) has lived and worked on his father’s ranch in Mexico his entire life. As the ranch faces financial strains, Armando’s younger brother Raul (Diego Luna) shows up with his new fiancée, Sonia (Genesis Rodriguez) and pledges to settle all his father’s debts. It seems that Raul’s success as an international businessman means the ranch’s troubles are over, but when Armando falls for Sonia, and Raul’s business dealings turn out to be less than legit, the Alvarez family finds themselves in a full-out war with Mexico’s most feared drug lord, the mighty Onza (Gael Garcia Bernal). It’s due out in the spring.