Rob Williams is a bit of a one-man gay film factory, having made the likes of Three Day Weekend, Make The Yuletide Gay, Role/Play, Out To Kill, The Men Next Door and, most recently, the Christmassy movie, Shared Rooms. Now he’s planning his return with Happiness Adjacent, which has launched an Indiegogo crowdfunding campaign in the hope of raising completion funding.

The romantic drama ‘explores the romance between Hank Eisenberg, a nice Jewish man who is still recovering from a bad breakup, and Kurt Dimmeldorf, a Midwestern guy who desperately needs someone to break up the monotony of his stale marriage. The men meet on cruise to Mexico, where gay Hank is traveling alone and bisexual Kurt is vacationing with his wife, Kate, who seems clueless about her husband’s extramarital affairs.’

The director shared with us that he, “Shot the film entirely on the iPhone 6s Plus (in 4K resolution!), guerrilla-style on a cruise to Mexico. Please check out the many perks we have available [on Indiegogo], make a contribution and/or share the link with anyone who might be interested!”

You can take a look at the fundraising video below, and then head over to Indiegogo if you want to help out. END_OF_DOCUMENT_TOKEN_TO_BE_REPLACED

The movie follows three different stories, set over the Christmas and New Year period. Laslo and Cal are a couple getting increasingly fed up with the fact that all their friends are either adopting or having babies through surrogates. They have no intention of becoming parents until Cal’s 17-year-old nephew suddenly turns up on their doorstep. He’s been thrown out of home for being gay and needs somewhere to stay – although Laslo and Cal aren’t exactly set up to parent a teenager. END_OF_DOCUMENT_TOKEN_TO_BE_REPLACED

Rob Williams must be a big fan of Christmas. He had success a few years ago with the coming out comedy Make The Yuletide Gay, and his latest, Shared Rooms, is also set around the holidays. He’s not only about Christmas though, as Williams has also directed the likes of Role/Play, The Men Next Door and Out To Kill.

Here’s the synopsis: ‘SHARED ROOMS explores the meaning of home and family through three interrelated stories of gay men finding connections during the week between Christmas and New Year’s Day – a married couple who take in a teenage relative who was kicked out of his home after his parents discovered he was gay; a pair of roommates forced to share a bed for the week, much to the delight (and horror) of the one harboring a secret crush on the other; and two men looking for a quick hookup who end up finding a much stronger connection.’

The film has already been winning awards, including the Audience Award, Best Feature Comedy at FilmOut San Diego. The trailer has now arrived, which you can take a look at below. END_OF_DOCUMENT_TOKEN_TO_BE_REPLACED

Rob Williams has made quite a name for himself in the world of gay-themed cinema with movies such as Three Day Weekend, Make The Yuletide Gay, Role/Play, Out To Kill and The Men Next Door. Now he’s planning to return with Shared Rooms, about the lives of three gay couples during the holiday.

However to get the movie made he needs some cash, so he’s launched an IndieGoGo campaign in the hope of raising $50,000.

The film is ‘a sexy, feel-good romantic comedy that explores the meaning of home and family through three interrelated stories of gay men finding connections during the week between Christmas and New Year’s Day:

It’s certainly a film that might be worth a watch.

As always with this sort of campaign, a range of goodies are on offer to those who pledge cash, including the movie on Blu-ray – which will be the only way to get Shared Rooms in that format. You can find out more over at IndieGoGo and perhaps help out.

It appears he’s going to be the lead character – and an intensely annoying one he’d be as well. Therefore it almost comes as a relief when he’s found dead in the communal swimming pool (that sounds like I’m being nasty, but if you watch the movie you’ll know what I mean). The police are quick to blame the death on a drug overdose, but Justin’s friend, Gene (Rob Moretti), thinks it was murder. He hires new resident and private eye Jim (Scott Sell) to investigate. END_OF_DOCUMENT_TOKEN_TO_BE_REPLACED

Rob Williams is a bit of a one-man gay movie industry, directing the likes of The Men Next Door, Role/Play and Make The Yuletide Gay and also co-founding the LGBT film distributor Guest House Picture.

Now he’s returning with a gay murder mystery thriller, Out To Kill, and the trailer is here!

The movie stars stars singer-songwriter Tom Goss (making his film debut) as a hypersexual, snarky and conniving singer named Justin Jaymes. Out To Kill is ‘an intricate and sexy “whodunit” murder mystery centered around a group of gay men living in a Tampa loft complex. When Justin Jaymes is found dead in the building’s pool, his neighbors enlist the help of resident private eye Jim Noble (Sell) to track down the killer.’

Out To Kill is currently heading out on the festival circuit. END_OF_DOCUMENT_TOKEN_TO_BE_REPLACED

CHECK OUT THESE RELATED ARCHIVES:
DIRECTORS: Rob Williams  FILMS: Out To Kill

Rob Williams has brought us the likes of Make The Yuletide Gay, Role/Play and The Men Next Door, but for his seventh directorial outing he’s bringing us a gay-themed murder mystery called Out To Kill.

And it look like it’s gonna be a bit sexy, as we’ve been sent a couple of behind-the-scenes pics showing three of the film’s stars having fun in just their underwear.

Out To Kill’ is an intricate and witty “whodunit” murder mystery centered around a group of gay men living in a Florida loft complex. When one of their own is found dead in the building’s central courtyard, his neighbors enlist the help of Jim Noble, the resident private eye, to track down the killer. With its surprise ending and tropical location, the film offers a sexy, gay twist to the traditional murder mystery.’

The film’s been shooting in Tampa, Florida, and should be ready to screen next year.

Take a look at the pics below. END_OF_DOCUMENT_TOKEN_TO_BE_REPLACED

CHECK OUT THESE RELATED ARCHIVES:
DIRECTORS: Rob Williams  FILMS: Out To Kill

Rob Williams has become a bit of a one-man gay-themed film industry, having made the likes of Three Day Weekend, Make The Yuletide Gay, Role/Play and The Men Next Door. Now he’s announced his seventh movie, which will be as LGBT-friendly as his earlier movies, as he’s planning a gay murder mystery, which is currently going by the title Out To Kill.

A press release from Williams company, Guest House Films (which he co-founded with Rodney Johnson in 2005), says, ‘Out To Kill is an intricate and witty “whodunit” murder mystery centered around a group of gay men living in a Florida loft complex. When one of their own is found dead in the building’s central courtyard, his neighbors enlist the help of Jim Noble, the resident private eye, to track down the killer. With its surprise ending and tropical location, the film offers a sexy, gay twist to the traditional murder mystery.’

The current plan is to start shooting in November in in Tampa, Florida. It’s a bit of a change for Guest House, who’ve made all the rest of their movies in Southern California.

“The people of Tampa and St. Petersburg have always been extremely supportive of our films, and have often offered to help if we ever decided to shoot a film in the area,” said Williams. “So I returned to Florida earlier this year, found some great locations, and then wrote the script with Tampa in mind.”

In order to help raise funds for Out To Kill, Guest House Films has launched a crowdfunding campaign on Indiegogo.  The campaign includes unique rewards such as the opportunity to name characters in the movie, pieces of original artwork that will be used in the film, and even a VIP Las Vegas experience with the Guest House Films founders. To learn more about the crowdfunding campaign, visit http://igg.me/at/outtokill/x/14878.

Take a look below for Williams Indiegogo video message. END_OF_DOCUMENT_TOKEN_TO_BE_REPLACED

Luring you in with a concept that has only really been seen in soaps and mainly carried out as heterosexual storylines, The Men Next Door makes you feel as though you’re about to see something a little different in terms of gay cinema. However once the film begins it’s rather disappointing to find that it’s just another mound of clichés, stereotypes and unfunny comedy. END_OF_DOCUMENT_TOKEN_TO_BE_REPLACED 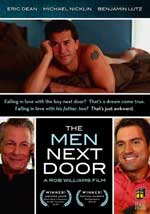 It’s interesting that in the last few years a real gay movie ‘industry’ has sprung up, with its own actors and stars. Writer/director Rob Williams has previously made the gay-themed likes of 3-Day Weekend, Make The Yuletide Gay and Role/Play, and now he’s back with The Men Next Door. To help him he’s pulled together a cast who’ve been seen in various other gay movies, such as Benjamin Lutz (The Love Patient, Bite Marks), Mark Cirillo (The Seminarian), Christopher Schram (Requited) and Ronnie Kroell (Eating Out: Drama Camp, Into The Lion’s Den), along with some others who are newer to the LGBT flick game. END_OF_DOCUMENT_TOKEN_TO_BE_REPLACED