We first met the Lego version of Batman (Will Arnett) in The Lego Movie – an arrogant vigilante convinced of his own greatness and jealous of the praise other superheroes get. He starts out the same here, saving Gotham City from The Joker and a Rogues Gallery of villains, and confident about how awesome everyone thinks he is. However, he’s also obsessed with doing things alone, with the result that when he’s back at Wayne Manor, he only has his butler Alfred (Ralph Fiennes) for company. Batman thinks that for the best, but it may be because he’s afraid of having a family. END_OF_DOCUMENT_TOKEN_TO_BE_REPLACED

Fox is busy expanding it X-Men movie universe with a variety of spin-offs, including Deadpool 2, Gambit and New Mutants. Following the success of Deadpool and Logan, it looks like they’re not gonna be afraid to try something a little different again with the last of those, as director Josh Boone told EW, “We are making a full-fledged horror movie set within the X-Men universe. There are no costumes. There are no supervillains. We’re trying to do something very, very different.”

The film is now starting to come together, with the news, via THR, that Rosario Dawson is in talks to stars in the movie, joining Split’s Anya Taylor-Joy and Game of Thrones’ Maisie Williams. The film will centre of a team of mutants, but one that’s more teen-driven and angsty that X-Men, with Dawson as ‘Dr. Cecilia Reyes, a medical doctor who has the ability to generate a protective bio-field around herself. The character assumes a mentor role for the group of fledgling heroes…’

‘Taylor-Joy is playing Illyana Rasputin, code-named Magik, a girl who has learned sorcery and uses teleportation discs to travel. Williams is Rahne Sinclair, aka Wolfsbane, a girl struggling to reconcile her religious beliefs with her power to turn into a wolf.’ The five young mutants in the movie are being held in a facility against their will, having to learn to to deal with the powers, which have proven a danger to others in the past.

Somehow I don’t think this movie will be held up in the future as a paragon of 21st Century feminism, but hey, it could be kind of fun in a Fatal Attraction/Single White Female way. Now a trailer for the movie has arrived, suggesting things are gonna get pretty extreme between Katherine Heigl and Rosario Dawson.

Here’s the synopsis: ‘Katherine Heigl (“27 Dresses,” “Knocked Up”) and Rosario Dawson (the “Sin City” films) star in the film. “Unforgettable” marks a reunion for Heigl and Di Novi, who previously collaborated on “Life as We Know It.”

‘The film is being produced by Di Novi, Alison Greenspan (“If I Stay”) and Ravi D. Mehta (“Grudge Match”), from a screenplay by Christina Hodson.

‘Heigl stars as Tessa Connover, who is barely coping with the end of her marriage when her ex-husband, David (Stults), becomes happily engaged to Julia Banks (Dawson)—not only bringing Julia into the home they once shared but also into the life of their daughter, Lilly (Isabella Rice). Trying to settle into her new role as a wife and a stepmother, Julia believes she has finally met the man of her dreams, the man who can help her put her own troubled past behind her. But Tessa’s jealousy soon takes a pathological turn until she will stop at nothing to turn Julia’s dream into her ultimate nightmare.’

The movie will be in cinemas next April. END_OF_DOCUMENT_TOKEN_TO_BE_REPLACED

Vanessa Hudgens continues her quest to prove she’s decidedly not a squeaky clean Disney Channel star anymore. In Gimme Shelter she is Apple, a teenager dealing with a childhood where she’s been in and out of often abusive foster case and has a junkie mother (Rosario Dawson) who only cares about the welfare check she brings in.

Apple runs away to find the father she never knew (Brendan Fraser), but when that doesn’t go well and she discovers that she’s pregnant, she starts to feel life on the streets may be her only option – until she finds potential salvation when a priest (James Earl Jones) tells her about a home for teen moms. END_OF_DOCUMENT_TOKEN_TO_BE_REPLACED

The Captive had a mixed reaction on its Cannes debut, despite the presence of acclaimed director Atom Egoyan and star Ryan Reynolds. However we’ll all be able to decide for ourselves when it’s released later this year.

Here’s the synopsis: ‘Eight years after the disappearance of Cassandra, some disturbing indications seem to indicate that she’s still alive. Police, parents and Cassandra herself, will try to unravel the mystery of her disappearance.’

Reynolds is Cassandra’s father, who feels particularly guilty as she was taken from his car. Rosario Dawson meanwhile is the investigator attempting to unravel the crime. Take a look at the trailer below. END_OF_DOCUMENT_TOKEN_TO_BE_REPLACED

With the marketing for Sin City 2: A Dame to Kill For it really does seem that they’re trying to suggest that if you liked the first one you’ll be getting more of the same for the second. Indeed if you didn’t read the full title, you could easily think this was a poster for the first movie – except this time the comic book noir world will be in 3D.

That’s not necessarily a bad thing, but it did give us a sense of deja vu.

‘Co-directors Robert Rodriguez and Frank Miller reunite to bring Miller’s visually stunning “Sin City” graphic novels back to the screen in SIN CITY 2: A DAME TO KILL FOR. Weaving together two of Miller’s classic stories with new tales, the town’s most hard boiled citizens cross paths with some of its more reviled inhabitants. SIN CITY 2: A DAME TO KILL FOR is the follow-up to Rodriguez and Miller’s 2005 ground-breaking film, FRANK MILLER’S SIN CITY.’

Atom Egoyan has been a busy man as he’s got two films due in the cinemas this year. There’s Devil’s Knot, starring Reese Witherspoon and Colin Firth, and The Captive, which stars Ryan Reynolds and it’s been announced will have its debut at Cannes.

Now a trailer for The Captive has arrived.

Here’s the synopsis, via TheFilmStage: ‘MATTHEW is driving his massive logging truck and leaves his precious daughter sleeping as he ducks into roadside washroom. When he returns she is gone.

‘In the following years, his wife TINA visits the police station where she has formed a relationship with the detective, NICOLE. Each year on CASS’s birthday, NICOLE gives TINA a report on how the search for her missing daughter is going. Lately, the police have identified the girl on the internet, but have had no success in tracking down her physical presence. CASS has aged 8 years since her disappearance. She is being held somewhere, but what is she doing there? The disturbing nature of her “broadcasts” is gradually revealed. Can CASS use these “broadcasts” to her advantage to plan her own escape?

‘THE CAPTIVE is a drama about how this kidnapping destroys two relationships—that of MATTHEW AND TINA, who blames her husband for all that has happened, as well of that of NICOLE and her co-­worker JEFFREY. NICOLE AND JEFFREY work intensely with the horrors of internet child abuse crimes from day to day. Surprisingly, they find they have a good relationship despite their horrific work and are attracted to each other. They have a strong connection until the moment when Jeffrey’s obsession with work crosses an ethical line.’

The Captive should be in cinemas later this year. END_OF_DOCUMENT_TOKEN_TO_BE_REPLACED

Rosario Dawson joined the world of Kevin Smith’s Clerks as Becky Scott in 2006’s Clerks II. Now the actress has suggested she’ll be back as the character in the planned Clerks III.

While doing press for her new film, Gimme Shelter, she was asked if Smith proposes to release the sequel this November, to coincide with the 20th Anniversary of the first film. Dawson commented, “Well, we haven’t shot it, so I don’t know if that’s possible. He just confirmed that I’m in it!”

Last month Smith said that he wants to start production this May. Although it would be a very quick turnaround to get the film in cinemas by November, it’s certainly not impossible, especially considering the Clerks movies don’t need a lot of special effects. It wouldn’t be too far from the schedule he’s been working to on his new movie Tusk either.

Brian O’Halloran, whose Dante character got engaged to Dawson’s Becky at the end of Clerks II, will likely return, alongside Jeff Anderson’s Randall. Jason Mewes and Smith should also appear as Jay and Silent Bob.

Diego Luna made his name starring in films such as Y Tu Mama Tambien and Frida, but while he still takes acting roles, in the past few years he’s spent as much time producing movies and turning his hand to directing the likes of Abel. Now he’s back behind the camera for Cesar Chavez, a biopic of the famed Latino civil rights leader, starring Michael Pena, America Ferrera, Rosario Dawson and John Malkovich.

‘Chronicling the birth of a modern American movement, Cesar Chavez tells the story of the famed civil rights leader and labor organizer torn between his duties as a husband and father and his commitment to securing a living wage for farm workers. Passionate but soft-spoken, Chavez embraced non-violence as he battled greed and prejudice in his struggle to bring dignity to people. Chavez inspired millions of Americans from all walks of life who never worked on a farm to fight for social justice. His triumphant journey is a remarkable testament to the power of one individual’s ability to change the world.’

It’s due out in the US in March. END_OF_DOCUMENT_TOKEN_TO_BE_REPLACED 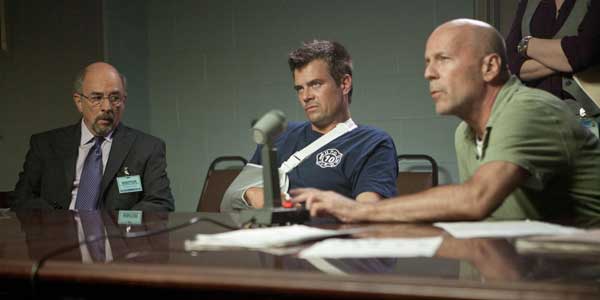 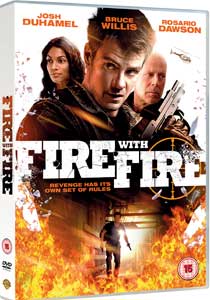 It’s clear from the very first scene that there are going to be problems with Fire With Fire. Josh Duhamel’s Jeremy and his band of firefighters bask in the satisfaction of having fought a blaze and get ready to leave, with everyone around congratulating them on a job well done. However what no one seems to have noticed is that behind them the fire hasn’t actually been put out, as flames are still visible. With this sort of lack of care is apparent in the first 30 seconds, it’s little surprise the rest of the movie is far from a masterpiece. END_OF_DOCUMENT_TOKEN_TO_BE_REPLACED