But that’s by-the-by to this sequel to The Wizard Of Oz, which is pretty much the same as the earlier story but different. Dorothy is just back from Oz when she gets snatched up (by a rainbow this time) and dumped back in the magical country. Once more she needs to get to the Emerald City, this time enlisting the help of an overweight owl, a prissy princess made of bone china, a marshmallow soldier and a talking tree that gets turned into a boat. END_OF_DOCUMENT_TOKEN_TO_BE_REPLACED

With the news that Harold Ramis died, many thought that would be the end of the long-gestating and perennially in-development Ghostbusters 3 (although Ramis’ long illness, which he hoped to recover from, may have been one of the reasons it hasn’t moved forward before now, as he would have been unable to participate).

However THR reports that Sony Pictures and director Ivan Reitman are still hoping to move forward with the movie, although there will now have to be a rewrite to take into account Ramis’ passing and the fact he will no longer he able to appear.

Last November it was reported  that Sony was planning to start production this spring in Cleveland, Ohio, although script issues had already pushed that back (you would think after more than five years they’d have something great by now). Gene Stupnitsky and Lee Eisenberg, have been working on the script, and will now have to make some revisions.

While it was believed Bill Murray had refused to return as Peter Venkman, some hope Ramis’ death might act as a catalyst to get him to change his mind. It’s also being suggested the other original stars may even be willing to take lower salaries in order to get the sequel off the ground. 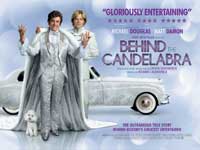 It also features career-defining performances from Douglas and Damon. Douglas is clearly having the time of his life as the outrageous entertainer – what a shame he can’t be nominated for an Oscar (as it premiered on HBO in the US, ruling it ineligible). It’s a spot-on performance of an ageing, absurd, ridiculous man, but the key is that Douglas’ Liberace takes himself completely seriously. A twinkle in Douglas’ eye would ruin it. What we have here is a master entertainer, a talented musician with a desire to be loved, and absolutely no self-awareness at all. He is vain, selfish and determined to have his desires fulfilled. END_OF_DOCUMENT_TOKEN_TO_BE_REPLACED

The cast of Tammy continues to grow. On Friday we reported that Allison Janney had signed up to star alongside Melissa McCarthy, Susan Sarandon and Mark Duplass. Now Dan Aykroyd has joined the movie, according to Variety.

The movie is about Tammy (McCarthy), who loses her job at a fast food restaurant and discovers her husband is cheating on her at the same time. She decides to take a road trip with her profane, whiskey-swilling grandmother (Sarandon). Dan Aykroyd is set to play the father of Mark Duplass’ character, who encounters Tammy and her grandmother on their road trip.

Melissa McCarthy is set to direct with her husband Ben Falcone, from a script they both wrote together. The shoot is scheduled to begin next month.

For years now there have been rumours, plans and speculation about a third Ghostbusters movie, but the film has been constantly held up, largely due to Bill Murray’s reluctance to return. However while he recently finally decided not to be part of the movie at all, he did give the necessary permission for things to move forward without him (Murray, Da Aykroyd, Harold Ramis and director Ivan Reitman all have veto power over sequels).

Now, buried in a Deadline report about Reitman’s Kevin Costner starring film Draft Day being put on hold is the news that Ghostbusters 3 may finally shoot summer 2013. Draft Day was delayed because Costner is too busy on Paramount projects (Jack Ryan, Without Remorse etc.), and there won’t be time to shoot the movie before Sony hopes to get the proton pack back on next summer.

Assuming it all works out (which is a big assumption where this film’s rocky road to the screen is concerned) Dan Aykroyd, Harold Ramis and Sigourney Weaver are all coming back to teach a new generation of Ghostbusters the ropes of the profession.

While numerous OZ films have been announced over the last few years, most have fallen by the wayside or are still in development, but two are coming fairly soon – Disney’s live-action Oz The Great And Powerful, and the animated Dorothy Of Oz. Now the trailer for the latter is here. The plot begins as Dorothy returns to Kansas to find it devastated by the tornado that sent her to Oz. Before she can react to the destruction of her home, she is transported back to Oz, where her three friends (Scarecrow, Lion and Tin Man) have disappeared. She meets a charming man made of marshmallows who can’t quite think for himself, a tiny china doll princess whose bossiness is a cover for her fragility, and a tugboat with as many personalities as he has pieces. Dorothy must help this group band together against the Jester, a wicked new villain who believes that all of Oz should be under his control. The movie features the voices of Lea Michele, Martin Short, Dan Aykroyd, Kelsey Grammer and Patrick Stewart.

There can only be a couple of screenwriters in Hollywood who haven’t had a crack at Ghostbusters 3 by now. Last week, Dan Aykroyd teased that there was yet another “new writing staff” working on the screenplay. Now Variety reports that Etan Cohen (Men in Black 3) is the man who’s signed on to rework the script.

Gene Stupnitsky and Lee Eisenberg (The Office, Year One) were hired to write the screenplay back in 2008 and since then it’s been through many hand. The project has primarily been stalled by actor Bill Murray, who is rumored to have hated the screenplays (they can’t make the film without his approval). The actor revealed on the Late Show with David Letterman last month that he was hesitant about signing on for the sequel, but he’s also said that it is a possibility. Sony is hoping that Cohen is the one who can make Murray happy!

Ghostbusters stars Dan Aykroyd, Harold Ramis, Ernie Hudson, and Sigourney Weaver will all likely return, if the project ever gets off the ground. Etan Cohen’s other credits include Madagascar: Escape 2 Africa, Tropic Thunder, and Idiocracy.

Dan Aykroyd and Chevy Chase started out as writers and actors on Saturday Night Live in the 1970s, and teamed up in comedies such as Spies Like Us and Nothing But Trouble, which Dan Aykroyd directed. However it’s been a long time since they worked together.

That’s about to change though, as Ayroyd announced on his Facebook page that, “Chevy (Chase) and I are about to start work on a script concept for a comedy movie. Cannot say too much about the concept, but the joy of working with him again is one that I am extremely excited about. Chevy is one of my favourite people, and one of the great anarchistic and physically committed comedians in the business.”

Of course, the fact they’re writing a script is a long way from it actually getting made, but it’s still an enticing prospect.

Will Ferrell and Zach Galifianakis are getting into politics, in their new movie at least, and now they’ve got some extra help as Moviehole reports that Dan Aykroyd has joined the cast of Dog Fight.

The comedy centres on two political rivals (Ferrell and Galifianakis), who are both vying for the same Congressional seat in a small South Carolina district. It isn’t known what character Dan Aykroyd will play, but he joins a cast which also includes Jason Sudeikis, Brian Cox, Dylan McDermott, and John Lithgow.

Jay Roach is directing Dog Fight from a screenplay by Shawn Harwell and Chris Henchy. Production is currently under way in New Orleans. 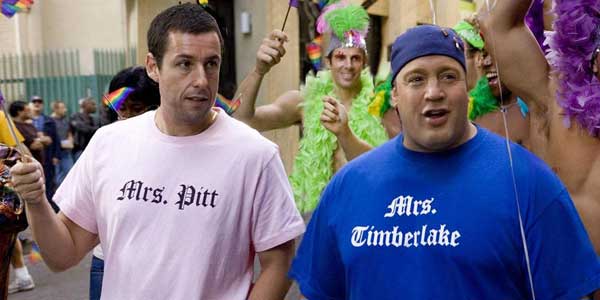 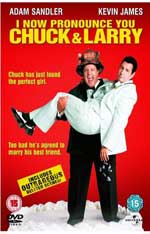 I’ve got a high horse and I’m going to get on it. Universal may have screened I Now Pronounce You Chuck & Larry to GLAAD (the Gay And Lesbian Alliance Against Defamation) and other gay groups to try and prove it wasn’t homophobic, but you can’t get around the fact that it trades on every homosexual stereotype imaginable. END_OF_DOCUMENT_TOKEN_TO_BE_REPLACED