Synopsis: ‘Mary Wollstonecraft’s family disapproves when she and poet Percy Shelley announce their love for each other. The family is horrified when it finds that the couple has eloped, accompanied by Mary’s half-sister, Claire. While staying in the home of Lord Byron at Lake Geneva, the guests are challenged to write a ghost story, which leads Mary to conceive her novel “Frankenstein.”’

The film is out in the US on May 28th. It’ll arrive in the UK on July 6th. Take a look at the trailer and poster for the movie below. END_OF_DOCUMENT_TOKEN_TO_BE_REPLACED

The film is set a year after Van Gogh’s death. Vincent’s friend from Arles, Postman Joseph Roulin (Chris O’Dowd), forces his slacker son, Armand (Douglas Booth), to hand deliver the artist’s final letter to his brother, Theo. After Armand discovers Theo is also dead, he travels on to the place where Vincent spent his final days, Auvers-sur-Oise, to see whether he should give the letter to the man who was supposed to be looking after him at the time, Dr. Gachet (Jerome Flynn). END_OF_DOCUMENT_TOKEN_TO_BE_REPLACED 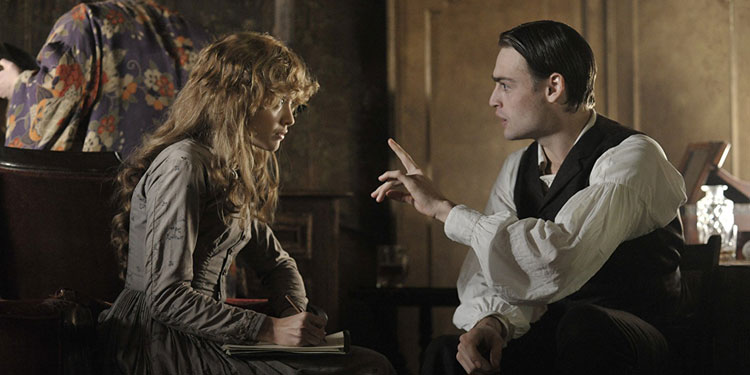 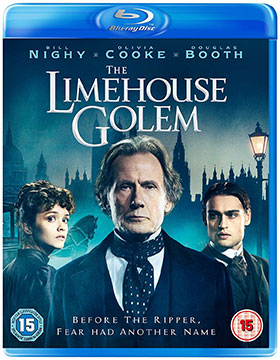 This line of questioning introduces him to Cree’s wife, Lizzie (Olivia Cooke), as well as the world of the music hall theatre she used to work at, which is led by cross-dressing comedy star Dan Leno (Douglas Booth). The number of potential suspects continues to grow – at one point even leading Kildare to the door of Karl Marx – especially after the discovery of a book that may be the murderer’s diary. But who wrote it and why? END_OF_DOCUMENT_TOKEN_TO_BE_REPLACED

Synopsis: ‘A serial killer stalks the Limehouse streets of Victorian London in 1880, the terrified population of this squalid district of the East End believe that the “Golem”, a monster from Judaic mythology, is responsible. Inspector Kildare of Scotland Yard is handed the impossible task of solving these heinous crimes and his investigations lead him on a race across the capital from The Old Bailey, to Newgate Prison, to the music halls of London and the British Museum. His chief suspects are music hall superstar Dan Leno, political agitator Karl Marx, writer and philosopher George Gissing and journalist John Cree. Kildare believes that famed performer Little Lizzie Cree, who is almost certainly destined to hang for the poisoning of her husband, holds the key to the identity of the real Golem. Kildare must solve the case and in doing so, he believes he will save the life of Elizabeth Cree.

The Limehouse Golem is directed by Juan Carlos Medina (Painless), based on the popular 1994 novel ‘Dan Leno and the Limehouse Golem’ by author Peter Ackroyd, and brought to life by Jane Goldman (Miss Peregrine’s Home for Peculiar Children, The Woman in Black, Kingsman: The Secret Service) who wrote the screenplay…

The movie will be in UK cinemas in September. END_OF_DOCUMENT_TOKEN_TO_BE_REPLACED

As you would expect, the Bennet sisters are living in Hertfordshire, with their mother keen to marry them off to eligible men. While Lydia, Mary and Kitty seem keen to take any suitable gent, Elizabeth (James) is more headstrong and independent. While fending off the advances of Parson Collins (Matt Smith), she meets the exceedingly rich Darcy (Riley), who she takes an immediate dislike to, seeing him as rude, judgemental and unpleasant. END_OF_DOCUMENT_TOKEN_TO_BE_REPLACED

The film will be released by Lionsgate UK in cinemas across the UK & Ireland on Friday 12th February 2016. END_OF_DOCUMENT_TOKEN_TO_BE_REPLACED

Mila Kunis is Jupiter Jones, a seemingly normal girl from a Russian immigrant family, who is working as a cleaner and unsure what to do with her life (or even if she should bother to do anything). However, it turns out she is the genetic reincarnation of a murdered space queen, and because of that, she should be able to inherit the queen’s vast wealth. END_OF_DOCUMENT_TOKEN_TO_BE_REPLACED

After years in development and endless problems, Pride & Prejudice & Zombies is finally heading towards production, and the cast just got a bit prettier as Douglas Booth and Emma Greenwell have signed on to star, according to Variety and Deadline.

Lily James, Sam Riley Bella Heathcote and Jack Huston are already onboard for the film. It’s based on Grahame-Smith’s novel, which keeps much of Jane Austen’s original Pride & Prejudice, but adds in a zombie apocalypse to give the classic love story an extra bit of zing.

Lily James will be Elizabeth Bennett, with Sam Riley as Mr. Darcy. Noah’s Douglas Booth will be Mr. Bingley, with Shameless star Emma Greenwell as his sister.

Burr Steers is set to direct, with filming due to start later this month.

The play Posh was a huge success after it premiered at the Royal Court Theatre in London in 2010, before transferring to the West End. Now it’s getting the movie treatment, under the title The Riot Club, with a cast full of bright young things including the likes of Sam Claflin, Max Irons and Douglas Booth.

Now a new clip has arrived which shows Claflin getting initiated into the titular club with a very nasty drink. It’s not exactly the sort of club I’d like to initiate Claflin into, although I wouldn’t mind if Douglas Booth was involved as he is here.

Here’s the synopsis: ‘Set amongst the privileged elite of Oxford University, THE RIOT CLUB follows Miles (Max Irons) and Alistair (Sam Claflin), two first year students determined to join the infamous Riot Club, where reputations can be made or destroyed over the course of a single evening. THE RIOT CLUB is directed by Lone Scherfig, who most recently helmed ‘One Day’, and the Best Picture Academy Award nominee ‘An Education’. It is produced by Pete Czernin and Graham Broadbent of Blueprint Pictures (‘The Best Exotic Marigold Hotel’, ‘Seven Psychopaths’).Screenwriter Laura Wade has adapted her critically-acclaimed play, ‘Posh’, with development support from the BFI Film Fund and Film4.’

The Riot Club premieres at TIFF this Sunday before it’s UK release on September 19th. END_OF_DOCUMENT_TOKEN_TO_BE_REPLACED

However after the success of Black Swan and with biblical epics looking like they might be coming back into fashion, Paramount decided to take a punt on the movie. However this is Darren Aronofsky, the man behind the likes of Requiem For A Dream and Pi, so it was always clear this wasn’t going to be your typical $125 million studio movie. That said, it appears even Paramount was surprised by how strange and intense it turned out. After viewing Darren’s preferred version they made their own, more traditional cut, but it turned out audiences liked Aronofsky’s take better and so that’s what we have. END_OF_DOCUMENT_TOKEN_TO_BE_REPLACED